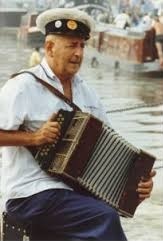 Peter was born in London on 18th November 1922 and died in Gloucestershire on 10th June 2006. He came into a family already steeped in folk music, heirs to the Cecil Sharp legacy, and committed to the English Folk Dance and Song Society (EFDSS). His father Douglas, was EFDSS director and his mother Helen the Secretary. His aunt Maud Karpeles had worked with Cecil Sharp collecting folksong in the Appalachian Mountains.

Despite his initial grounding in the EFDSS, he perceived at an early age a gap between the formal EFDSS approach and the full vigour of traditional music when, before the war, he saw the energetic Romanian Calusari dancers in London and when during his war service he sought out traditional Italian and North Africa musicians.

World War II found him serving in the RAF, making models for bombing targets. After the war, he joined in the Kennedy family dance band, learning first drums and then fiddle and melodeon.

In 1947 he was appointed the north-east regional representative for the EFDSS and quickly found a huge gap between the narrow musical focus of the EFDSS and the living folk culture of the northeast. For 2 years he immersed himself in the music, learning tunes and dances from local musicians such as George Tremain and Jack Armstrong, as well as organising village barn dances and even the first regional clog dance competition. Peter claimed that at the time, the EFDSS seemed to be unaware or uncaring about this vigorous village music-making.

These early experiences set the mould for the rest of Peter’s life. Peter wanted to discover and promote what he perceived as the real music of the people, to take the music to the people and to draw out their music from them.

Peter carried this ideal with him when in 1949 he was asked by the BBC to work in Bristol, carrying out research for folk music radio programmes. He enthusiastically used this as a launch pad for his collecting activities in the West Country and, as in the northeast, found a vigorous village tradition of song, music, dance and story-telling. He wanted to use the local performers in the programmes rather than the trained musicians and singers so favoured by the BBC, a revolutionary idea at the time. His enthusiasm was rewarded when the BBC agreed to broadcast extracts of his field recordings, but baulked at using whole songs.

Peter’s approach to music was always to encourage people to value their own culture, not to take on someone else’s. For example, although he participated in the American Square Dance craze of the 1950s, he lamented that it brought an end to the real village barn dances.

There followed fruitful collecting collaborations in the 1950s with the American Alan Lomax and with Seamus Ennis from Ireland, leading to a host of BBC programmes. This was his most productive collecting period, and he obtained iconic recordings of important artists such as Sarah Makem, Johnny Doherty and the McPeake family. But he also travelled to literally all corners of the British Isles, recording wherever he went.

Eventually Peter’s BBC commitments ran down, but by then he was in full momentum of promoting folk music for the EFDSS and incidentally helping sow the seeds of the folk revival of the 1960s, where he was a key figure, promoting artists such as Ewan MacColl, Bert Lloyd, the Spinners and the Dubliners.

While working for the EFDSS, he helped compile the series of Fiddlers Tune Books and Community Dance Manuals, drawing on his own knowledge of collected tunes and dances. However, he continued to be anti-establishment and in 1968 Peter parted company with the EFDSS. His move to Dartington College of Arts in Devon in 1969 was the start of his company Folktrax, as he started to produce cassettes of his archive for the students and then decided to market them.

His move to Gloucester in the 1980s saw him continuing to market Folktrax and also concentrated on his own music-making. With guitarist/singer Peter Hayward and virtuoso fiddler Ben Hall, Peter’s ‘Hooley Band’ could be found playing for local socials and in local pubs, as well as busking in the streets of Gloucester. He was still gigging in his 80s, but complaining that the P.A was getting heavier.

There are so many things that Peter initiated that we now take for granted: Peter commissioned the first melodeon in G and D, now universal in English folk music; he started folk clubs before there were folk clubs; he initiated dance and music competitions which continue to this day. He even had a hand in introducing the now ubiquitous bodhran to Ireland.