A Group of Young Soldiers 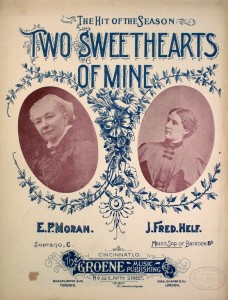 This song arises from an 1898 composition “Two Sweethearts of Mine” composed by E P Moran (Soprano) and J Fred Helf (Mezzo Soprano), when the opening line was

“A group of young fellows one night at a club”.

The sentimentality of the song has struck a chord with many singers, who take is an anthem of being far from home, perhaps in the army and it continues to be in oral circulation.  It has proved popular with source singers, especially gypsies, ever since, and has regularly turned up in recent collections.

Apart from Mrs Taylor’s version, it has also been collected in Gloucestershire from the following: