Alternative title: The Troubles of a Young Shaver 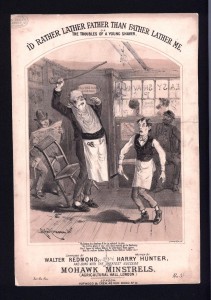 This music hall song was written by Walter Redmond and Harry Hunter in 1876. It was recorded by Harry Hemsley and it is possible that Reg Hannis learnt it from a 78 rpm record.  The song was also included in the Didbrook Mummer’s Play.