Harry Hurlbutt Albino (1889-1957) inherited an interest in folk songs from his father and collected several songs and dance tunes from Gloucestershire and others places. A fuller account of his work can be found under collectors and here. Albino’s father Henry Charles Albino sang Oh Soldier Won’t You Marry Me.

Henry Charles Albino’s father was Vitore Albino who was born in Italy, the son of Bosano Albino, a farmer, and came to live in England. He set up as a jeweller in Bourton on the Water and married Eliza Wilson on 19 May 1842, the daughter of a merchant, William Wilson. Vitore signed the register by mark. Four of their children, Elizabeth,William Richard, Joseph and Edwin Wilson were baptised on 25 January 1849 at Bourton on the Water.

One unfortunate incident at this time was when Vitore Albino 2 July 1850 appeared at Gloucester Trinity quarter sessions charged with receiving stolen goods knowing then to have been stolen. However he was acquitted.

Another son, Henry Charles, the collector’s father, was baptised at Bourton on the Water on 16 January 1859. By 1851 Vitore and Eliza were living in Bourton on the Water with their children where Vitore was working as a jeweller and Eliza was working as a straw bonnet maker. At that time they also had a 16-year old house servant. On 18 July 1858 their daughter, Clara Ann was baptised in Bourton on the Water. According to the 1859 Slater’s National Commercial Directory Eliza continued to work as a straw bonnet maker and Vitore at that time was a watch and clock maker. In 1861 they were still in Bourton on the water with their family and Vitore was described in the census as a jeweller and in the 1863 Post Office Directory he is described as a working jeweller. Vitore Albino died in the Stow on the Wold registration district in 1864,

Henry Charles Albino attended Cheltenham College where in the 1871 Census he was one of 14 boarders at Birdlip House, St Luke’s, Cheltenham. After leaving school and after the death of his father he went with his mother to Leicester where Eliza Albino was the licensed victualler at 3 and 5 the Cricket Players Inn at 3 and 5 Church Gate, St Margaret’s, Leicester. Henry Charles was her assistant and s sister, Elizabeth, was also working there as a barmaid. They also had another barmaid and two domestic servants. There were eight other public houses in Church Gate at that time and numerous shops. Henry Charles Albino married Mary Jane Ann Hurlbutt in Leicester at the beginning of 1886. She was born in Bourton on the Water according to the 1891 census but born in Wisbech according to subsequent censuses. By 1891 they had moved to London and were living at 1 Compton Terrace, Vicar’s Moon Lane, Edmonton with their one year old son, Harry Hurlbutt Albino, who was born in Winchmore Hill, Middlesex. They also had a 17 year old domestic servant. Henry Charles was working as a shipbroker’s clerk. His mother, Eliza had moved back to Gloucestershire and was keeping the Royal Standard Inn in St Paul’s, Cheltenham with her daughter, Elizabeth. In 1901 Henry Charles and his wife, then called Jeannie, were lodging at 17 Devonshire Place, Brighton with Harry and another son, Horace Charles, born about 1893. By 1911 the family had moved to London and were living at Hazeldean, Rutford Road, Streatham They had another son, Harold Wilson Albino, who had been born in Brighton 2 years previously and had a live in cook and housemaid. Henry Charles was then described as a merchant and his son, Harry, was an undergraduate at Cambridge.

Henry Charles Albino died on 7 November 1925 and is buried in Bourton on the Water churchyard with his son, Harold Wilson Albino, who died in 1928. 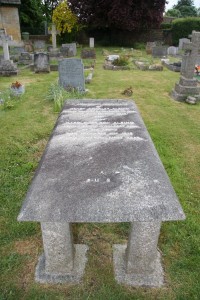