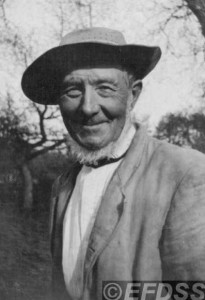 Cecil Sharp visited William Bayliss in Buckland on 7 April 1909 when William sang him Floating by the Tide, On Christmas Time, Seventeen come Sunday, Three Butchers, The Unquiet Grave and the Wassail Song.

The birth of a George William Baylis was registered in Stow on the Wold Registration District in 1847. William’s grandparents were possibly Henry Baylis, born circa 1801 and his wife, Hannah, born circa 1797 of Stanton. They were living in Stanton in 1841, but by 1851 Henry was no longer living with Hannah so possibly had died. They had at least four children: Jane, Mary, Mark/Marko and Samuel born between 1827 and 1834. They also had another grandchild, Emma born circa 1848.

A William Bayliss’ death aged 79 was registered in the Registration District of Winchcomb, Glos. in 1926.