There were 15 brothers and sisters in one generation of the Brazil family of which the younger members were recorded.  Their parents were William Brazil, born in Devonshire, and Pricscilla Webb, born in Cornwall.  The family had lived in London for some time, then travelled in southern England and Lemmie was born “outside Southampton in Devonshire”, following which they spent some 27 years travelling in Ireland, where most of the younger children were born, before returning to England and settling in Gloucester in 1919. Their father sold all his horses at Gloucester market, after which they dealt in rags and scrap iron, whilst the children made a living with cars and trucks.  Lemmie had a second-hand shop in Gloucester’s Westgate Street. Lemmie played for stepdancing in Ireland, when that form was almost identical to the stepping seen in England with the dancers competing by dancing on a square board.  They would put a big coat on her, and as she played they would throw money into her lap. Her instrument was a Hohner one-row melodeon and in quite good condition, other than that one or two of the reeds were a bit ‘out’ and, the cause of most of her frustration, the thumb-strap was broken.  Considering this,  her playing was little short of remarkable, and was obviously the playing of someone who, all her life, had played for dancing. Lemmie had a large repertoire of step dance hornpipes, song tunes, jigs and other tunes. She had some unusual songs – songs which the others in the family didn’t sing – The Cruel Mother was one of hers, as well as Bonny Black Hare and Little Sir Hugh, whilst both she and Danny sang Shot Like a Bird on a Tree. Lemmie lived at the Sandhurst caravan site near Gloucester as did her brother. Harry. 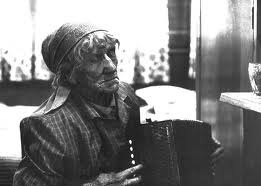