Mrs Cobb sang ‘Barbara Allen’ to John Madison Carpenter in Sapperton between 1927 and 1935. John Baldwin recorded Alf Cobb at home in Siddington in 1969, when he sang ‘Johnny Smoker’ , ‘I had a Fine Hat Boys’, ‘William Taylor’, Brennan on the Moor, Canadian Boat Song, The Crocodile. My Old Arm Chair, a carol ‘Back Lane’ to the tune of Cranbrook, recited words from the Sapperton Mummers’ Play and talked about dancing in the Mummers’ Play. He also sang fragments of the songs ‘The Wheel of Life’, ‘Katie Farrell’, ‘Paddy Fagan’ and ‘Kymanero’. He also played ‘The Sweet Nightingale’, and ‘Onward Christian Soldiers’ on the saw. Alf Cobb’s family were the only Cobb family living in Sapperton in 1881 so it appears that Mrs Cobb must have been from this family, too. 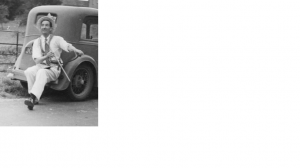 Alf Cobb was one of the leading lights associated with two morris dance sides before the war, one in Sapperton and one in Dursley. He was an excellent dancer (well known for his Bacca Pipes jig, see photo) and an excellent fiddler (although it was said that he played too fast and had a scratchy fiddle!). He learned the morris fron Mrs Jimpson at Sapperton. He played on occasions for the Cheltenham Men and also for the newly named Gloucestershire Men just after the war accordimg to Gerry Phelps, a member of the morris side. 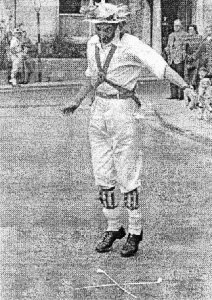 Alf was also renowned for playing the saw – an ordinary woodsaw which Lionel Parkhouse of the Gloucestershire Morris Men stated that he played with a violin bow, obtaining different notes according to how much he flexed the saw. He had won (or Dursley had won) many competitions.

Alf Cobb’s family had lived in the Cirencester area for at least four generations back.
His great-great-grandfather, Daniel Cobb, was born in Cirencester about 1750. He had at least four sons and three daughters, including Alf’s great-grandfather, Henry Cobb, who was born in 1774 and christened there on 25 October 1774. In 1841 Henry was working as an agricultural labourer, living in Cirencester with his wife, Elizabeth and three children: John (Alf’s grandfather) born about 1820, Thomas born about 1826 and Richard born about 1827. By 1851 Henry’s wife had died and he was living at 214 Gloucester Street, Cirencester, an agricultural labourer, with his son Thomas, also an agricultural labourer, Thomas’ wife, Amelia and their daughter, Luisa. Alf’s grandfather, John, was now married to Eliza who was born in Sapperton and they had moved to Sapperton with two sons, Thomas, born 1848 and Henry, born 1851. By 1861 they had two more sons and a daughter all born in Sapperton: Charles F. born about 1855, George E. born about 1857, William born 1860 and Susan A, born about 1861. Henry and Thomas were both working as agricultural labourers. They were living in an area of Cirencester called ‘Barracks’. This was a terrace of cottages ¼ mile west of Sapperton village on the road to Frampton where the navvies working on the railway tunnel were originally housed. The railway tunnel, part of the link between Swindon and Standish, was begun by the Cheltenham and Great Western Union railway in 1839 and taken over by the G.W.R. in 1843. The tunnel, running from north of Hailey Farm to the Golden Valley and broken by a cutting 100 yards long, was completed in 1845. In 1871 the family were still in Sapperton where John and his sons, Henry, Charles, George and William were all working as agricultural labourers. His daughter, Susan, was a silk worker. They also had a further three daughters, Ellen, Alice and Emma. By 1881 Alf’s father, William was still living at home in Sapperton working as an agricultural labourer as was his father and his brothers, Charles and George. By 1891 Alice was the only child still living at home in Sapperton. By 1901 William had married and moved with his wife, Jane who was born in Exeter to Park Corner Farm, Duntisbourne Rouse. William was working as a cattle stockman on the farm. Alfred Charles Cobb was baptised in Sapperton on 25 December 1902 and was living there with his parents in 1911. They had had three children of whom two were still alive: Alf and his older brother Edward Albert, born at the end of 1899. William was working as a roadman. Several of Alf’s uncles were living close by, for example, Thomas and his family were in Sapperton and George and his family were in the nearby village of Edgeworth. Alf Cobb’s father was one of three men who provided the music for Sapperton Church where he played a wooden flute.

When Alf Cobb lived in Sapperton an influential member of the Arts and Crafts movement (Ernest) Gimson moved to Pinbury Park in Sapperton  in 1893. Gimson was one of the ‘intelligentsia strata’ there who came into the area and bought a house, having a different way of life, very arty crafty. They were very connected to the furniture makers at Broadway (Tower) set upby William Morris and had a close connection to the Whiteway community, where Gerry and Muriel Phelps lived and so visited there often.  The Sapperton community started dancing as it was the thing to do and they used to sing school songs in parts.  Alf’s mother or father worked for the Gimsons so Alf was probably influenced by this community.

Gerry Phelps of the Gloucestershire Morris Men stated that Alf moved to Siddington. Alf’s brother, Edward died in 1965 in the Cirencester registration district. By profession Alf was a tiler and had the distinction of being engaged for 25 years before marrying Isabel A. Carter, the daughter of a blackmith from Siddington, in the Cirencester registration district at the end of 1956.

Alf Cobb died in 1981 while living at 4 Siddington Villas, Siddington.