William Davies was visited by Cecil Sharp on 8 April 1908 when he played ‘The Butterfly’ and played and sang ‘Greensleeves’. Sharp wrongly spelled his name ‘Davis’. Eleanor Adlard in ‘Winchcombe Cavalcade’ says that when the Winchcombe morris dancers danced on the Abbey Terrace ‘Old Mr Davies, the much-loved sexton, would be there to play his fiddle’.

In 1857 he married Mary Ballinger from Dumbleton and by 1861 was working as a master painter living in Vineyard Street, Winchcombe, with his wife and two children, Gwenllian (spelled Gweathlen in the Census return and Gwenthlion in baptism) aged 3 and John aged 1, both born in Winchcombe. His daughter was baptised as Gwenthlion 28 March 1858 in Winchcombe. By 1871 they were still living in Vineyard Street and had four more children: Lydia aged 7, George and William, both aged 3, possibly twins, and Frederick aged 1. The three eldest children were scholars. Continuing to work as a painter William Davies became Parish Clerk for Winchcombe by 1881. His daughter, Lilia, now called Lydia, had become a pupil teacher and his children George, William and Frederick were scholars. By 1891 George was Parish Clerk and sexton and had moved to Three Gables, Gloucester Street, Winchcombe. His sons, George and William aged 23, were still living with him and both working as painters. His grandson, Lloyd Davies, who was born in Winchcombe, was also living with them. He was still living in Gloucester Street, Winchcombe in 1901, working as a master glazier and employer. His son, George, had married and moved away but his son, William, was still living at home and working as a glazier. His daughter, Lydia, aged 36 was still also living at home as was his grandson, Lloyd, then aged 14. By 1911 William and Mary were still living in Gloucester Street, Winchcombe. He was still the Parish Clerk and sexton. Their son, William Levis (Lewis) Davies aged 41 was living at home, working as a painter and decorator and their daughter Lydia aged 40 was also living with them. Both children were unmarried. One of their six children had died by this date. He was buried on 31 March 1917, aged 86 and his wife died four years later.

William’s daughter Gwenllian (Gwenthlion(sic)) Davies was born in 1858 and baptised on 28 March in St Peter’s Church, Winchcombe. She was living at home with her parents until at least 1871.She apparently never married and by 1891 she was working as a housemaid and living at 9, Nightingale Road in Portsea, Hampshire, In 1911 aged 52 she was working as a parlourmaid at Sarn Hill Grange in Bushley. She may have been the Gwenllian Davies who died in 1937 in Billesdon, Leicestershire.

William’s son, John Davies, was born in 1859 in Winchcombe. He worked as a painter and decorator and also as a glazier.

William Davies’ son, George Cromwell Davies, was born in 1867 in Winchcombe, probably a twin with his brother William. He married Emma Annie Day in 1893 in Winchcombe and by 1901 he was living in Gloucester Street, Winchcombe, working as a house painter and he also had a grocery business at home. By then they had two children, Edgar George born 1894 and Percy Charles born 1896. By 1911 he was a self-employed house decorator, still living in Gloucester Street, Winchcombe. His son, Edgar, was an apprentice at a general printers and his son, Percy, was an errand boy at a stationers. They had two more children, Rupert Jack, born in 1901 and Effie Annie born in 1903. They had another son, Frank William Davies born in 1906 but who died before 1911. George Cromwell Davies died 25 January 1940 while still living at 51 Gloucester Street, Winchcombe. His effects went to the Reverend Edgar George Davies, clerk.

George Cromwell Davies’ son, Edgar George Davies, was born in 1894. He was an apprentice at a general printer’s in Winchcombe in 1911 and married Vera G. Gauntlett in Devizes, Wiltshire in 1937. He served in the 9th Batallion of the Gloucestershire Regiment 1914-1920 (no 13033) where he was awarded the Victory MedaI. On the death of his father he was granted probate of his estate in the name of the Reverend Edgar George Davies, clerk. He probably died in 1972 in Winchester. One of his sons, Peter John M. Davies was born in Devizes in 1938. A researcher on Ancestry.com has described Edgar George Davies as also having a daughter and another son. The son married twice and in turn had 3 daughters and a son, who between them had 4 daughters and 3 sons.

William Edward Davies’ son, William Lewis Davies was born 1868 and lived at home with his parents until at least 1911.

William Edward Davies’ daughter, Lydia Balinger Davies was born about 1863 and lived at home with her parents until at least 1911 unmarried. In 1901 she and William’s grandson, Lloyd, were the only family living with William and Mary thus Lloyd was probably her son. In 1881 she was a pupil teacher. By 1891 she was a schoolteacher and at the time of the Census was visiting her sister, Gwenthlian at 9, Nightingale Road in Portsea, Hampshire. She died in 1951 in Cheltenham.

Lydia’s probable son, William’s grandson, Lloyd Davies was born in Winchcombe in 1887. In 1891 and 1901 he was living with his grandparents in Winchcombe but by 1911 he had moved to Sutton Coldfield where he was working as an electrician, boarding with a chauffeur’s family. He then probably joined the 2nd Field Company, Royal Engineers and was killed in action in France in 1915. He is remembered on the Le Touret Memorial, in Richebourg-l’Avoue, Pas de Calais. 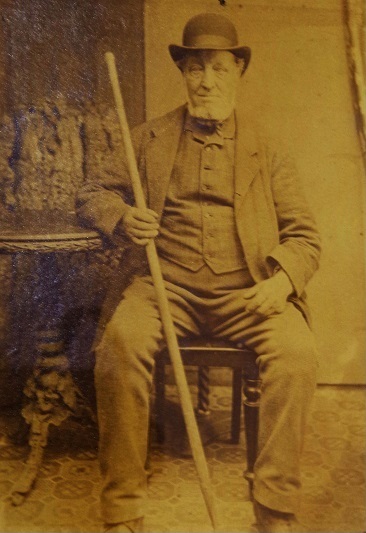