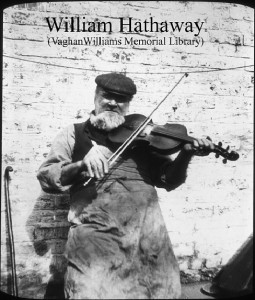 Cecil Sharp’s chance encounter with two workmen, whom he heard whistling Morris tunes in Hammersmith, had far-reaching consequences. William Charles Stagg was one of the workmen. He was the eldest son of the Lower Swell fiddler William Hathaway (see below) and had danced morris at Stow-on-the-Wold. Stagg gave Sharp information as to how to find Morris musicians in Gloucestershire and later copied 18 tunes which Sharp collected from his father, possibly with a view to using them with Mary Neal’s Espérance Club dancers. Stagg gave his tunebook to Helen Kennedy and the manuscript was copied: the original is now lost. We were given a photocopy by Peter Kennedy. Sharp’s interview with Stagg sent him to Gloucestershire on his next collecting trip, in March 1907. The day after meeting John Mason at Stow-on -the-Wold he visited William Hathaway at 8 Burton Street, Cheltenham and noted many of the tunes used by the Lower Swell Morris Dancers.. He also visited William Hathaway on 4 April and 1 August 1907. In the 1901 Census William Hathaway was living at 52 Burton Street, Cheltenham but another musician, a piano teacher, Alice Davis, was teaching at 8 Burton Street where she was boarding with the Stephens family. By the time of Eliza, William’s widow’s death in 1911 she was living at 7 Burton Terrace, Park Street, Cheltenham – the next road to Burton Street.

William Hathaway was born on 3 May 1841 in Lower Swell, the son of Henry Sheppard, a carpenter, and Caroline Sheppard, formerly Hathaway. In 1851 he was living with his grandparents, William and Jane Hathaway, and their son, Samuel, in Lower Swell where his grandfather, William, was a labourer who had been born in Swell. By 1861 William was apprenticed and living with John Padbury, a cordwainer, in Oddington. At the end of 1865 a son, William Charles Stagg, was born to Eliza Stagg who had been born in Burbage, Wiltshire, and early the following year William Hathaway married Eliza Stagg in Oddington. William Charles later took the surname Hathaway. By 1871 William and Eliza were living in Maugersbury where William was working as a cordwainer and they had two sons, Harry born in 1868 in Burbage, Wiltshire and Edwin Thomas born in Stow on the Wold in 1871. They also had a 21 year old servant girl. They then had four more children born in the Stow on the Wold registration district (which included Lower Swell), Edwin George in 1874, Daniel in 1876, Sarah Ann in 1878 and John in 1880. In 1881 the family were still living in Lower Swell where William was working as a cordwainer and his son, William, was working as an agricultural labourer. By 1891 the family had moved to 52 Burton Street, Cheltenham where William and his wife were both working as agricultural labourers. His son, Edwin, was a labourer and his eldest son, William was no longer living at home. By 1901 William had lost his sight but was working as a boot and shoe maker. The only child still living at home was Edwin who was working as a navvy on the Stow on the Wold railway, but they had four lodgers, three navvies and a market gardener. William Hathaway died and was buried in Cheltenham in 1910. Eliza, William’s widow’s died in 1911 and at that time she was living at 7 Burton Terrace, Park Street, Cheltenham – the next road to Burton Street.