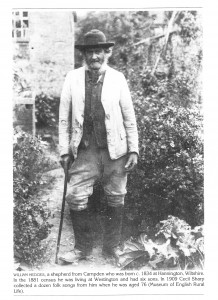 The shepherd William Hedges was a prolific source of songs for the collector Cecil Sharp who visited him on five occasions in August and September 1909. He sang 15 songs representative of a country singers repertoire, mainly songs about courting and life in the countryside but also some other favourites such as The Golden Vanity about a young cabin boy who was a hero deceived by his captain. He was also one of the shepherds who actually sang a song about shepherds: We Shepherds Are The Best Of Men. The songs which Cecil Sharp collected from William Hedges were The Broken-hearted Gentleman, The Crafty Maid’s Policy, Fifty Long Miles, The Golden Vanity, Horses to Grass, I Followed her, John Ridler’s Oven, Pretty Nancy of Yarmouth, Shepherds are the Best of Men, Taffy and The Three Butchers.  For some songs William Hedges could only remember the tune: The Bold Fisherman, The Outlandish Knight, Oxford City, Rosemary Lane and The Three Butchers. Sharp also collected some riddles from William Hedges.

William Hedges family had living in Hannington in Wiltshire, just over the border from Gloucestershire, going back to his great-grandfather, Henry Hedges, who was born there in 1754, his grandfather, William, born there in 1774 and his father, Henry, who was baptised there on 18 February 1803. Henry, an agricultural labourer, married Martha Pipkin from nearby Inglesham on 11 October 1830 and William was baptised in her home village of Inglesham on 23 February 1831.By 1841 the family were living at Curtiss Farm, Hannington, where William’s father, Henry, was working as an agricultural labourer. At that time William  had three younger brothers, Joseph, Charles and Isaac. In 1851 the family were still living in Hannington where William aged 18 was working as an agricultural labourer like his father. He also had another younger brother, Henry.

On 23 September 1854 William Hedges married Emma Wright from Alcester, Worcestershire, at St Thomas’ Church, Birmingham. He was still working as a labourer. They went to live in Oversley Green near Alcester, Worcestershire, and had two daughters who were baptised in Arrow, Worcestershire: Hannah in 1857 and Fanny Ann in 1859. About 1860 the family moved to Cleeve Prior where William was working as a shepherd and they had a son, William Henry, that year. In 1863 they had another son, Thomas, but by the time of the birth of their next son, Charles, in 1865 the family had moved to Gloucestershire and were living in Chipping Campden at Old Coombe. They then had two more sons in Chipping Campden, Frederick in 1866 and Albert in 1867. In 1881 they were living in Westington, Chipping Campden and had another son, Joseph.  Six of William and Emma’s sons were still living with them, with the eldest four working as shepherds. Also living with them was a granddaughter, Ellen Hedges. Ellen was the daughter of unmarried ‘Anna’ Hedges, who was probably William’s daughter, Fanny Ann. William and Emma continued to live in Westington where William worked as a shepherd. In 1891 two of their sons were still living at home. Fred was working as a general labourer and his son Albert was an agricultural labourer. Ellen was also living with them, now described as their daughter.

William Hedges’ wife, Emma, died at the end of 1900 and by 1901 he was living as a retired shepherd at Westington with his grandson, Charlie, an ordinary agricultural labourer, son of William Hedges’ son, William Henry Hedges. However William then went to live at No 1, Sir Baptist Hicks’s Almshouses in Church Street, Chipping Campden where he stayed until his death in 1919. Charlie was later killed in World War I in Loos, France in 1915.

William Hedges daughter, Hannah Hedges, married Robert Newman at Shipston on Stour Warwickshire at the beginning of 1923. She died in the North Cotswold Registration District in 1981.

William Hedges Daughter, Fanny Ann, was probably the ‘Anna’ who gave birth to a daughter, Ellen, on 20 March 1876. Ellen was living with William Hedges in 1881. In 1903 Ellen married William Jennings, a grocer’s traveller and by 1911 they were living at 88 King’s Road, Bengeworth, Worcestershire with a son, Maurice, born in Handsworth Staffordshire in 1906. Ellen died in Evesham in March 1971

William Hedges’ son, Frederick Hedges, married Elizabeth Ann Smith from Chipping Campden in 1892. By 1901 they were living at 29 Paul’s Houses, Mickelton, where Fred was working as a carter on a farm, with three sons and a daughter, William, Henry, Nora and Harold. In 1911 they were still living at Pike House, Paul’s Houses, Campden with another son, Frederick L(e)onard. Fred was still working as a waggoner on a farm and his two eldest sons were labourers on a farm. Frederick Hedges died in March 1942 in the North Cotswold registration district.

William Hedges son, Albert Hedges, married Helena Clara Field, who was born in Clevedon, Somerset, in early 1897 in Aberfan near Merthyr Tydfil . By 1901 they were sharing a house with another family at 4, Cottrell Street, Aberfan, Merthyr Tydfil and had two sons, William H. born about 1898 and Albert G, born about 1899. The family remained in Aberfan and by 1911 they were living at 17 Bryntaf, a terraced house with a dormer window, and Albert was a colliery timberman. His son William only aged 13 was working as a colliery hewer and Helena’s mother, Sarah Field, had come to live with them from Somerset. Albert Hedges died in the Merthyr Tydfil registration district in March 1932.

William Hedges son, Joseph Hedges, married Emily Jane Bennett, the daughter of a carpenter from Hackney, in Epsom on 25 December 1896. They settled in Epsom and in 1901 were living in Crimea Cottage near Epsom Common with three daughters; Emma, Edith and Alice, all born in Epsom. Joseph Hedges died there in June 1939.