In July 1963, Russell Wortley recorded the song “The Twelve Apostles” from Cameron at Yorkley Slade.  In the 1970s, Richard Chidlaw visited Cameron to learn the song, although he was not able to make a recording of it.

As well as knowing the song “The Twelve Apostles”, Cameron knew the Yorkley mummers play. He was a prolific writer, and he created many booklets, and pamphlets reflecting life in the Forest during his lifetime and prior to his time.

Cameron Riley Johnson was born into a Forest of Dean family. His grandfather, Benjamin Johnson, was born in 1824 in Parkend to Benjamin Johnson, a woodman, and his wife . On 29 March 1845 at Parkend he married Ann Kear of York Lodge, Parkend.  At the time Benjamin was working as a labourer and living at Russell Lodge, Parkend. The lodges were keeper’s houses in the Forest of Dean. Their son, Alfred, Cameron’s father was baptized on 4 June 1850 at St Paul’s church, Parkend,  In 1851 Benjamin and Ann were living at Yorkley Slade with three children George Benjamin aged 5, Edwin John aged 2 and Alfred, Cameron’s father  aged 10 months. By 1861 Benjamin and Ann Johnson were living at Yorkley Slade with eight children including Cameron’s father, Alfred and a domestic servant. Benjamin was working as a grocer and draper and his son, Alfred was working as a grocer’s assistant. In 1871 Benjamin and Ann were still living in Yorkley Slade at Forest House with six children including two more daughters. Alfred was then working as a grocer’s assistant to his father who was a grocer and draper. Another son, George Johnson, was living 2 houses away and also working as a grocer’s assistant.

Alfred Johnson married Ann Ellway who was also from the Yorkley area on 8 October 1871 at St James’ Church, Gloucester. At the time he was a grocer’s assistant living in Barton Street, Gloucester and she was living in Eastgate Street, Gloucester, the daughter of a collier. She had previously had a daughter Lucy Ann Johnson on 31 July 1870.

In 1881 Alfred and Ann Johnson were living in Yorkley with five children where Alfred was working as a grocer and draper’s clerk. Living next door to them was Harry Cox, who was also a draper’s assistant. All had been born in West Dean. Alfred was a grocer and draper’s clerk in Yorkley where he and Ann were living. Their eldest son, William was a steam engine fitter. Cameron, aged 3 was a scholar. From 1889 to 1901 Alfred Johnson appears in the electoral register for Yorkley and in 1905 in the electoral register for Yorkley Slade.

Cameron Riley Johnson was born 14 January 1886 and baptised on 24 February 1886 in the Forest of Dean Bible Christian Circuit Yorkley Chapel. By 1891,  aged 5, he was living in West Dean with his parents Alfred Johnson aged 40, then still working as a grocer and draper’s clerk and Ann Johnson aged 41 and siblings William aged 18, a steam engine fitter, Gilbert Percy aged 13, Ralph Roynam aged 10, Bernice Olivia aged 8, Horace Vincent aged 6 and Victor Stanley aged 3. Alfred and Ann had eleven children between 1871 and 1888 including Cameron Riley Johnson.

In  1901 Cameron Johnson was aged 15 and living in Old Croft, West Dean, with his parents Alfred Johnson aged 50, a grocer’s and draper’s bookkeeper and wife Ann aged 51 and his siblings Bernice aged 18, Horace aged 16 and Victor aged 13. Cameron and Horace were working as scrap bundlers in line plate work.

Cameron’s father, Alfred, died on 8 May 1907 at Yorkley Slade, aged 57 and was buried on 12 May 1907 at All Saints, Viney Hill. By 1911 Cameron Riley was still living at home with his widowed mother and two brothers and was working doubling at a tinplate works. This is part of a process for preparing steel for tinplating.

Cameron Riley Johnson married Ethel Aminda Morris, the daughter of a policeman from Cheltenham in All Saints Church, Viney Hill on 21 July 1913. 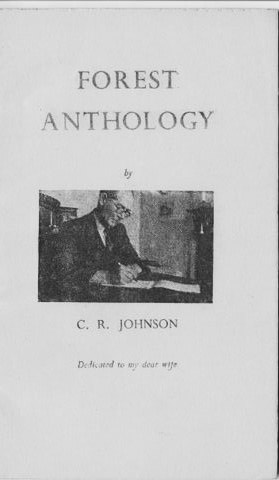