George Joynes of Longborough aged 67 was recorded by Peter Kennedy in 1957 when he sang What a Fine Hunting Day or We’ll All Go A-Hunting Today and The Reaper Called Death. He was also a village fiddler who played an important part in Cecil Sharp’s collecting of the morris dances of Longborough from fiddler Harry Taylor.

Roy Dommett describes Sharp’s experiences with George Joynes thus: For some of the time at Longborough, Sharp had the assistance of the local young fiddler George Joynes, then aged twenty three, who had had no connection with the morris but who could read music. Until then Joynes had had no idea that there had been a local morris, so well had it died since the early 1890’s. Sharp visited Taylor on 13th April 1911, and noted to his great delight his version of London Pride. Douglas Kennedy met Taylor for the first time on Sharp’s men’s team’s Cotswold tour in 1912. Clive Carey visited Taylor on 22nd March 1913 during a follow up visit to the Cotswold survivors on behalf of Mary Neal. Mr. Joynes was fired with enthusiasm after Sharp’s visits and wrote out some tunes played or whistled by Harry’s eldest son Henry, also a fiddler. He intended to give them to Sharp when he next saw him but they never met again. Joynes lived at Longborough with his sister. He had assembled a collection of morris tunes from libraries and other places but they were stolen just before World War II by a woman visitor who had been stopping locally in a caravan.” Thus George Joynes was a village musician who had the ability to note down music.

In 1924 the Travelling Morrice from Cambridge University visited Longborough and danced there. Their records show that  ”Dancing took place in the street before lunch, with Mr. Taylor and Mr. Joynes, the fiddler, among the audience”.  “Mr. Taylor, warmed with reminiscences of former “jangles”, formed up the party on the lawn and proceeded to teach four new dances in the Longborough tradition – Saturday Night, Cuckoo’s Nest, Old Trunkles and the Old Woman tossed up in a Blanket … Mr. Joynes, careful man, had all the tunes neatly written out, and so it needed no great imagination to copy them out for the use of the Travelling Morrice. It appears that Mr. Joynes got his tunes from Mr. Henry Taylor. After the 1929 tour the local interest generated by the Travelling Morris visits encouraged some local men to get together. They met in a local barn under Joynes and young Henry Taylor with the help of old Harry. They never rose to a public performance, but there were still men in 1964 who could dance the basic steps in the orthodox fashion with their hands raised up at the side of the head, but without any waving of the hands or handkerchiefs. When asked what they did with their hands, wondering about evidence for the shaking or twists, they answered “stick them up in the air, you fool” .”

The earliest members of the Joynes family that we know were living in Farmington in 1726 where George’s great great great grandfather, Thomas Joynes, was baptised on 28 April, the son of William and Mary Joynes. Thomas Joynes married Elizabeth Denley of Shipton on 26 May 1745. Elizabeth was the daughter of James and Rhoda Denley, from whom musicians Thomas and Charles Denley and singer Tom Denley were also descended.

Joseph Joynes, who was George Joynes grandfather, was working as a labourer in Upper Swell at the time of his marriage to Eleanor (also known as Leonora) Hawkes, who was also the daughter of a labourer, in Longborough on 20 November 1847. Eleanor had been born in Blockley. They lived in Longborough where their son  George’s father, James, was baptised on 5 May 1850.

By 1851 Joseph was working as a labourer in Longborough and Eleanor was a field labourer. They were living there with two sons, George aged 3 and James aged 1. In 1861 they were still living in Longborough with six sons and a daughter. John Hawks, Eleanor’s widowed father, was also living with them as a lodger. They continued to live in Longborough and by 1871 had four sons, three of whom were working as shepherds, and four daughters, By 1881 they were living in a private house in Longborough with a son, Thomas, and a daughter, Eleanor. Joseph Joynes died in 1889 in the Stow on the Wold Registration District.

James Joynes had left home by then and on 25 November 1876 he was working as a shepherd, as was his father, when he married Emma Martha Cambray, also the daughter of a shepherd in Longborough.

George Joynes was born in Longborough where his father was working as a labourer and was baptised there on 7 February 1886. By 1891 his father, James, was working as a labourer in Longborough and was living there with his wife, Emma, and two sons, Joseph aged 10 and George aged 5 and a daughter, Alice, aged 1 all of whom had been born in Longborough. In 1891 George was still living at home in Longborough village and he and his brother, Joseph, were both working as horsemen on a farm. His father was then a shepherd. In 1911 George Joynes was still single and living at home with his parents who had had 5 children, of whom 4 were still alive. George was working as a general labourer and his father as a farm labourer. George appears on the electoral register for Longborough for at least the years 1918, 1930, 1938 and 1939. In 1939 he was living with Alice Joynes, his sister.

Roy Dommett stated that George Joynes was a gardener most of his life and a clock and watch repairer in his spare time, he had also worked on farms, as a shepherd and in the Donnington Brewery just two miles away. George Joynes apparently never married and died at the District Hospital, Moreton in Marsh on 1 October 1963 when probate was granted to Alice Joynes. 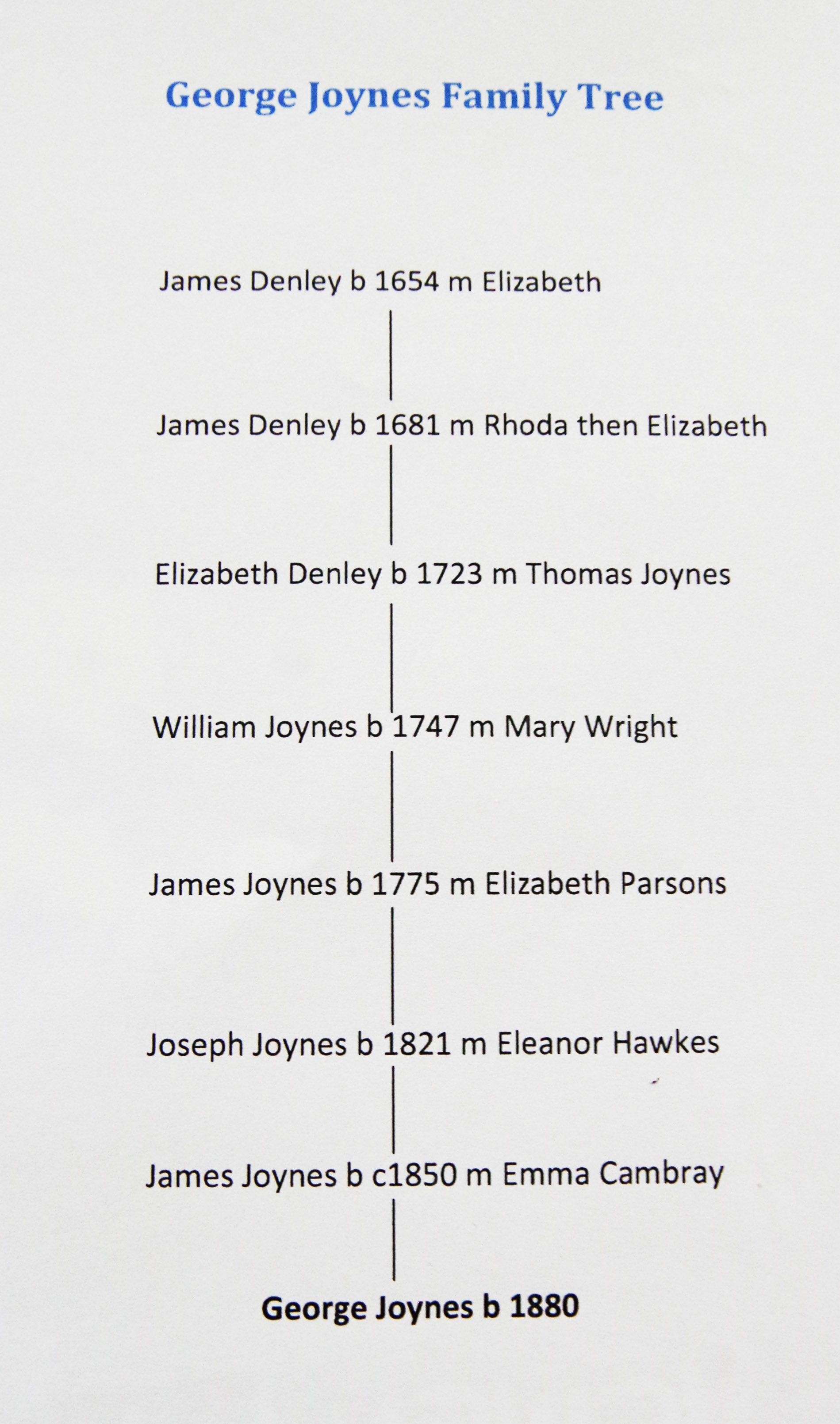