King of the Gypsies

A Brave Young Sailor Courted me

The earliest ancestors of this family that we know were John Lane who was probably born in 1777 and his wife Elizabeth. John was buried in Winchcombe on 3 November 1830.Their son, James Lane, was baptised in Winchcombe in January 1808 and married Mary Clark, also from Winchcombe, there in April 1826. James and Mary both signed the marriage register by mark. They had four sons, including Archer Lane (see below), and four daughters, born between 1829 and 1847. James and Mary and their two eldest sons, including Archer, were agricultural labourers. They lived in various locations in Winchcombe: Castle Street in 1841 and Vineyard Street in 1851. Archer was their fifth child born in 1838 and their sixth child was another James Lane born in 1840. This James was an agricultural labourer and carter who married Catherine Corbett Penelope Fleming, who was living in Corndean, Winchcombe, on 29 October 1859 in Winchcombe. Catherine’s father was a gamekeeper and her mother was Scottish, from Renfrew. They had ten sons and two daughters all born in Winchcombe who mainly worked as labourers: Archibald born 1860, James born 1862, Agnes born 1963, Charles Henry born 1865, Catherine born 1869, John born 1871, Hector born 1863, Henry Charles born 1874, Frederick Cecil born 1877, George born 1879 and William Fleming born 1883. Catherine died on 14 April 1907 whilst living in Hailes Street, Winchcombe, and on 30 December the following year James also died, having entered Winchcombe Workhouse.

Cecil Lane married Edith Agnes Dale on 21 November 1898 in Winchcombe where Cecil worked as a labourer and cowman. The family moved around the area and they had six boys and two girls. Nelliewas born in Little Washbourne in 1900 and Olive Agnes was born in 1901 in Stanley Pontlarge where Cecil was working as a cowman.  Francis John was born in 1903 in Snowshill, James born in 1905 in Snowshill, Archibald born in 1907 in Snowshill , George born about 1910 in Little Washbourne and Ernest Wilfred (Ernie) was born 3 December 1916 in the Winchcombe Registration District. Three of Cecil’s brothers went to live in Wales, including Henry Charles who lived in Bridgend.

Cecil Lane died in December 1940 in the Cheltenham Registration District.

Between 1923 and 1934 Ernie Lane was living at Nursery Glasshouses, Toddington and then By 1939 Ernie Lane was living at Didcote Farm Cottage Dumbleton with his parents, Cecil  and Edith Agnes and at age 16 was working as an under cowman. From then onwards he lived all his life in Dumbleton. In 1949 he was living at 28 Dumbleton. In 1952-3 he lived at 3, Old Rectory, Dumbleton and between 1956 and 1965 he lived at 1, Golden Hay, Dumbleton. He was an active member of village life there.  He joined the Dumbleton cricket club at the age of 11 and played for them for the next 45 years, before hanging up his books to become the club’s groundsman, gaining the nickname of The Singing Groundsman.

Apart from his hobby of cricket, he was a keen poet and published a book of poetry These Dumbleton Hills, a homage to the local countryside he knew so well. 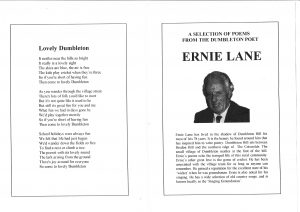 He was of course well known as a singer, particularly after the cricket matches, and had a repertoire of comic and folk songs.

Ernie Lane died in 1997 in the Cheltenham Registration District.

Archer Lane enlisted in 4th Battalion of the Rifle Brigade in 1857 and had 16 years military service. He was a Private in the Rifle Brigade stationed at Chatham Barracks in the 1871 census. Percy Grainger stated that Archer Lane had been in Corfu, Malta, Gibraltar and Canada.

In 1878 he married Eliza Houlton who was born in Bolton, the daughter of a cotton weaver, and by 1891 was living with her at 3, Miner’s Row in Pendleton in Salford in Lancashire. He was working as a general labourer and she was a cotton winder. They moved back to Winchcombe and Eliza died towards the end of 1901. Archer Lane was in Winchcombe workhouse at least from October 1899, described as an agricultural labourer. He remained there until at least February 1901, then was discharged from there before returning on 12 July 1901. He remained in the Workhouse until at least 20 February 1901 when the Workhouse Master reported that Archer Lane had been helping to nurse inmates with the disease Erysipelas. He was back in the Workhouse from 2 January 1905 until 26 March 1905 and then back there again on 3 January 1906. Life was not always easy there as on 14 August 1909 the Master’s report stated, ‘I beg to report Edmund Skillern for fighting and striking inmate George Care across the face with a handsaw on the 5th Instant and also with quarrelling this morning with another inmate i.e. Archer Lane.’ However in 1911 he was given leave to attend a Veterans Dinner in Cheltenham on Empire Day 24 May 1911. Eleanor Adlard of Postlip Hall supervised the transport of the veterans to the dinner.