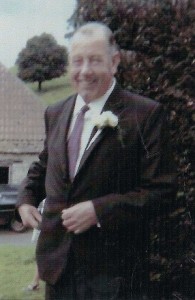 Ernie Payne of Hawkesbury Upton was visited by Gwilym Davies on 13 March 1979 when he sang the Barley Mow, Cock a-Doodle Do, Fish and Taters, The Herring’s Head, I was there a-Watching Them and The Seeds of Love. Gwilym Davies visited him again on 24 June 1980 when he sang At the Little Pig and Whistle, Goodbye Old Ship of Mine, The Graf Spee, I Bain’t Half So Soft As I Look, In these Hard Times and a Song About Taxes.
Ernest Payne was born in 1908 in Kelston, near Bath. During World War II he was in the Home Guard, repairing and driving lorries. He was a popular driver of Bleakens Coaches because of his singalongs. Ernie was Secretary of the Royal Ancient Order of Buffaloes in Hawkesbury Upton and a member of the Hawkesbury Show committee. The Fox Inn at Hawkesbury was his local for singing and playing dominoes. Ernie was a singer at local social clubs and after retirement would sing at old people’s homes along with Frank Deacon on his accordion. Ernie died in 1980.

Notes by Keith Payne (son) and Carol Davies May 2015