Bill Williams ‘of May Hill’ was recorded by Peter Kennedy in 1957 aged 84 at 62 Alvin Street Gloucester. Therefore he was born around 1873. He sang The Soldier and the Sailor which had been sung by his father, which was supposed to refer to the very hard times. He also learned songs from his mother including The False-Hearted Man and Brian O’Linn. He also sang the song The Lazy Moocher.  He said that he used to sing carols at Christmas but had forgotten them. The carollers did sing the Holly and the Ivy – he only remembered a snatch of this. He talked about morris dancing at the Yew Tree, (Longhope,) Mitcheldean, the Nag’s Head, Longhope, the Farmer’s Boy in Lea Lane (Longhope) and the Wagon and Horses, Hucclecote. He also mentioned an old country dance called’ The Cotton Breeches’.

His father used to sing in The Plough at Newent.

He confirmed that the morris dancers came to Drybrook.  Stevie Baldwin (see Stephen Baldwin) and Bill’s grandfather both played the fiddle for morris. Once they went to the Yew Tree for the donkey races; he started playing there and two chaps from the forest started wrangling. 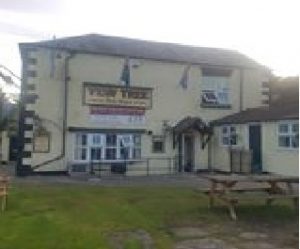 He stated to PeterKennedy that there was also morris dancing at the Nag;s Head at Longhope and the Farmer’s Boy up Lea Lane. 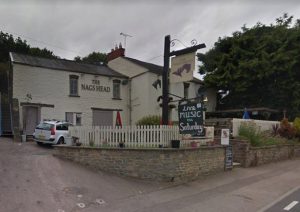 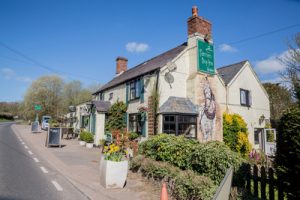 He said that Morris dancing was nothing like it is today – it was a very old fashioned way and they would dance around and used pull their skirts up and catch hold around one another’s neck and hug one another. Men and women would do the same.  They’d do it out on the lawn at the pub and the same up at Hucclecote at the Wagon and Horses. 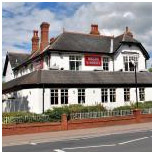 The Wagon and Horses,Hucclecote courtesy of Tripadvisor

Bill said that he used to work there. It used to be done there and ‘it was all enjoyment and there was never no rows’. There wouldn’t be anyone in charge – the fiddler would sit down in his chair and play his fiddle then everyone would be drinking their pints and listening for a time and then as soon as he’d start off the dancing everybody would get up for the dancing. They’d go round and round in the clubroom. They did all sorts of different dances including a very old one called The Cotton Breeches. They did the the morris dances as well as the country dances there. The fiddler used to “change the tone” for the morris dances. Once Bill and Stevie went to the Yew Tree and Stevie played in the clubroom up top in the Yew Tree which goes up from Mitcheldean. Tambourine and triangle sometimes played with the fiddle.

He commented that the morris was different at Clifford’s Mesne. There was only one fiddler at Clifford’s Mesne – that was Stevie – ‘he was a friend of mine’. Bill worked in Clifford’ s Mesne for Eli Sterry and Ernest Sterry who lived ‘up the Lane’ at the top of (? Stonehouse) pitch. Eli Sterry had a gammy leg so didn’t dance.  He is noted in the census for 1881 as being a ‘cripple’ aged 13 living at Longhope with his family, including his brother Ernest. In 1890 he was fined for poaching. By 1911 Eli was married and living at Primrose Cottage, Longhope with his wife and children.

Bill’s family had a half acre of garden and his father did stone breaking and bark peeling. He said, ‘He was a terror was my father for fighting’.  Once his father fought three champions – one at Nailbridge. He had been in the Plough at Newent and he went into Gloucester and bought a jacket and a ‘billy cock hat’ like a trilby. They came back home and got onto Over bridge and there were three men waiting for them. ‘The men set on them and one chucked his new jacket into the river. His father leathered the three of them and walked home. He went into the plough at Newent some weeks after and these 3 men were there. He didn’t say nothing but sat down. One took his pint from off the table.’ He ordered another pint and he took that too so he fought them there.

Bill He was one of 12 children and he was the oldest but one. They had grazing rights in the Forest and could get wood from the forest and make firebricks from the coal dust pressed up together into bricks – used to call the place they got the coal dust from Little Hell – it was dark up there.

At one time he worked worked in the Cyfarthfa colliery then Cwm Pit in Merthyr for 12 shillings a week – he said ’ you didn’t get enough money to live on’. He worked from 6 in the morning until 6 at night.  This area was a nationally and internationally important extractive landscape dating to the 18th and 19th century. The remains there now comprise a series of late 18th to 20th century ironstone and coal workings associated with the Cyfarthfa Iron Works, with levels, pits, mine shafts, collieries, quarries, opencast workings and associated spoil tips, industrial buildings, air shafts, leats, drains, reservoirs, tracks, inclines and tramroads. (from Glamorgan Gwent Archaeological Trust) In 1896 there were 681 men working at the Cwm Colliery. 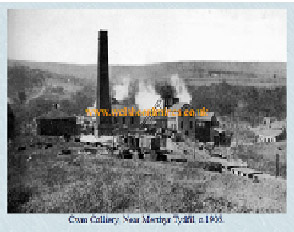 No further information is available on Bill Williams’ family.