Cecil Sharp visited John Fry on 3 April 1907 at ‘Thormarton’ (Tormarton) when he sang The Husbandman and Serving Man, The Rambling Sailor, The Sprig of Thyme and William and Mary.

Joseph Fry married Charlotte Ann Woolman on 10 August 1878 at St Saviour Church, Leicester and then moved to Leicestershire. In 1881 they were living at Hills Yard, Oadby with two children, Edith A. Fry born about 1879 and Lilian K. Fry born about 1881, where Joseph was working as a brickyard labourer. About 1885 they moved to they had moved to Aylstone, Leicestershire and by 1891 had five more children, William Fry aged 8 born Oadby, Ernest aged 6 born Oaby a scholar, Emily aged 5 born in Aylestone, Violet aged 3 born in Aylstone and John Thomas aged 1 also born in Aylstone. By 1901 Joseph and Charlotte were living at 141 Hencage Road, Clee, Grimsby and had six more children, Emma J. aged 9, Bertha aged 8, Frances G. Aged 7, Lillian aged 6, and Hilda aged 2 all born in Leicester and Joseph H. O Fry aged 1 born in Whittlesea, Cambridgeshire. Joseph had then risen to Foreman of a brickyard where his two eldest sons, William and Ernest, were also working. His two eldest daughters, Emily and Violet were laundresses washing clothes. By 1911 the family had moved 44 Low Road, Doncaster, Yorkshire where Joseph was still working as a foreman at a brickyard. His sons, John Thomas and Francis George, were still living at home and working in a brickyard as labourers. Lillian Rose, Charlotte and Henry were also still at home and they had two more children, Charlotte Annie aged 9 born in Grimsby and Charles Stanley aged 5 born in Aldershot, Hants. Hilda and Joseph were not at the house at the time of the census. A Joseph Fry died in Doncaster in 1941.

Albert Osbourne George Fry married Mary A, born in Bath about 1868. In 1891 Albert was living at 2, Pool’s Buildings, Twerton, Somerset with his wife, Mary, and their son William O. Fry aged 3 months born in Twerton. Albert was a maltster’s labourer and his wife was a dressmaker. By 1901 they were still living in Bath at 9, St Swithin’s Place where Albert was a foreman maltster and his brother, George was living with them and working as a maltster’s labourer. By then they had five more children, all born in Bath, Edward G. aged 8, Frederick aged 6, Eva M. aged 5, Emma M, aged 4 and John L, aged 2. Also boarding with them was a charwoman. Martha Jarvis aged 62 from Wiltshire.By1911 the family were living at 4, Morford Street, Bath. Albert was working as a maltster’s labourer. His son, Edward, was a butcher’s assistant and his son, George, was a gas fitter’s errand boy. Albert and Mary had been married for 21 years and had 11 children of who 7 were still alive and 4 had died. Albert died in Bath at the end of 1943. More information about his descendents can be found on the Fry Family Tree on Ancestry.com here: http://trees.ancestry.co.uk/tree/877880/family?cfpid=-2034399063.

William Hart Fry married twice, His second marriage as a widower was to Lilias Schofield on 22 May 1899 at St Peter’s Church in Horbury, Yorkshire. At the time he was living at 75 Newbridge Road, Bath and working as a clerk. She was the daughter of a dyer from Horbury. By 1901 they were still living at 75 Newbridge Road, Weston, Bath where William was working as a commercial traveller for the local wool company, Carrs, and had two children, Stella aged 3 and William H. Fry aged 1, both born in Bath. William’s son, William Hart Fry died later the same year. Lilias died in 1910 and by 1911 William was living at 24a Kipling Avenue, Wellsway, Bath with his aunt Elizabeth Fry as housekeeper. She may have been married to John Fry’s Brother George who also lived in Bath. William had another two children, Phyllis aged 5 and John aged 3. John married Audrey E. Hallett in Bath in 1933. William Hart Fry died 24 June 1950 while living at 66, Wells Road, Bath, Somerset. An obituary appeared in the local paper: 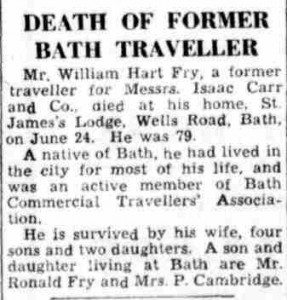 Emma Jane Fry possibly married George Bridgman in 1891 in the Chipping Sodbury registration district but an Emma Fry was a witness to her brother, George’s second wedding in 1899. Therefore she probably married Herbert Alfred Fry about 1900 and by 1911 was living in Bristol .They had had 6 children of whom four had died. The ones still living with them were Doris aged 7 and Evelyn Anne aged 7 months. Further information on the descents of this family can be found on the Fry Family Tree on Ancestry.com here: http://trees.ancestry.co.uk/tree/877880/family?cfpid=-2034399063.

George Henry Fry
In 1901 George was living with his Brother Albert’s family in Bath at 9, St Swithin’s Place working as a maltster’s labourer. He possibly married an Elizabeth who was housekeeper to George’s brother, William Hart Fry, in 1911. According to the above family tree on Ancestry.com George married and emigrated to Colorado.