Harry H. Albino visited Thomas Pitts aged 79, a carter of Eastleach, on 3 December 1934 when he sang Fair Young Damsel and Jim The Carter’s Lad. Thomas Pitts had been a pipe and tabor player for the Sherborne Morris side and was one of the principal informants about the Morris in Sherborne.  Albino subsequently visited his son, Charles Pitts, on 3 October 1935 when he sang The Box On Her Head or Fair Young Damsel, Jim The Carter Lad and It’s Of A Comely Young Lady Fair or Phoebe And The Dark-Eyed Sailor. Albino returned to visit Charles Pitts on 3 December 1935 when he sang We’re All Jolly Fellows That Follow The Plough. Albino stated that Charles Pitts was a carter living in Brize Norton, Oxfordshire, formerly of Eastleach. Thomas Pitts’ wife, Esther Pitts was also visited by Alfred Williams when she sang ‘Early in the Morning’. 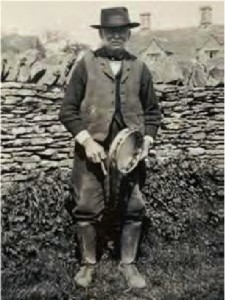 Thomas Pitts’ father, Richard Pitts aged 89, who was not a morris dancer, told folk dance collector Clive Carey about 1913 that he remembered morris dancers in Sherborne named Hedges, Hawker, Lambert and two brothers Kent, one called John. He also recalled Mr Simpson as playing music on the whistle and dub for the morris dancing.

Russell Wortley and Albino met Thomas Pitts, “an old Sherborne dancer”, then aged about 80, at Eastleach before the last war and obtained some tunes. His photo is on the cover of Old Cotswold Photographs by Viner of the Cirencester museum.  From Roy Dommett’s “Notes about the Sherborne Morris” Kennet Morris Men Workshops 1979/80. Russell Wortley described him as ‘a great man for tunes’.

In Russell Wortley’s notes A.L. Peck says that possibly in 1938 they went round to his daughter’s who played and sang various tunes. She had been seen by the collectors Peter Kennedy, Maud Karpeles and others and tunes collected from her.

The family of Thomas Pitts’ grandfather, also called Thomas, were from Great Barrington but he moved into Sherborne on his marriage to Mary Dodge who was from Sherborne on their marriage in Sherborne on 8 November 1803.

Richard Pitts at his garden gate, 1912. Photo taken by Lillian Tremaine, a resident of Sherborne, one year prior to his death.

In 1876 Thomas Pitts married Esther Jackson, also from Sherborne, and shortly afterwards had a son, William Richard, followed in 1878 by another son, Charles Edwin Pitts. In 1881 they were still living in Sherborne where Thomas was working as an oxman. They had another son, James, born that year. In 1883 they had a daughter, Sarah Ann, who was born in Coln St Aldwyns, followed by a son, Frederick Thomas born in 1886 on Cocklebarrow Farm, Aldsworth and another daughter, Eliza, born in Eastleach in 1887.  In 1891 they were all living in Sherborne where Thomas was working as a carter and agricultural labourer. His two sons, William and Charles, were also agricultural labourers and his other children, James and Sarah, were both scholars. Sarah later married Charles Deaney, a labourer from Little Missenden, Buckinghamshire, but later moved back to Eastleach. That same year Thomas and Esther had another daughter, Florence Mary E. Pitts, born on Aston Farm, Gloucestershire. By 1901 the family had moved to The Downs, Shipton under Wychwood, Oxfordshire where Thomas was working as a carter on a farm. His son, Frederick, was an under carter on a farm and his daughters Eliza and Florence were the only other two children still at home. Charles Pitts had moved away from home and was living in Lyneham, Oxfordshire, where he was working as a carter on a farm. He was a lodger in one of several houses called ’Row’ with William Albert Henry who was working as a cowman on a farm. In 1911 Thomas and Esther were living in Eastleach Turville, Lechlade with their son, Frederick aged 24, who was unmarried. Thomas and Frederick were both working as both labourers on a farm. Thomas and Esther had been married for 34 years and had seven children all still living. Esther died in 1925 and was buried on 10 July1925 in Eastleach Turville and Thomas Pitts died in 1940 in the Cirencester registration district.

In 1904 Charles Edwin Pitts married Edith Agnes Lowe. Edith was born in Glympton, Oxfordshire, the daughter of James Lowe, an agricultural labourer. She had previously worked as a housekeeper to her father in Cassington, Oxfordshire. In 1901 Edith had been living in one of three houses called ‘sheephouse’ in Eastleach Martin with her sister Alice and her husband, a shepherd, and their family. She had a daughter, Muriel Harriet M. Lowe, born out of wedlock in 1898. Very shortly after her marriage to Charles Pitts she had a son, Walter Charles Lowe, stated to be illegitimate in the 1911 census record. Charles and Edith had a son, Arthur Frederick J Pitts in 1906 (his second name was given as Francis in the 1911 census but on his death in Swindon in 1988 his name was also given as Arthur Frederick). In 1911 Charles and Edith were living on Lechlade Downs, Lechlade where Charles was working as a carter on a farm. They had two further daughters, Flora Esther born 1908 and Kathleen Annie born about 1910. Charles Pitts died in 1956 in Oxfordshire.

Charles’ daughter, Kathleen Annie Pitts married John J. Arkle also in Oxford in the same quarter of the year in 1931 as her sister, Flora.

Notes by Carol Davies. More information about the other children of Thomas Pitts can be found on the Pitts family tree on Ancestry.com http://trees.ancestry.co.uk/tree/39403195/family?fpid=19364654235