Tom Denley of Brockhampton sang The Wild Man of Borneo which he stated he had heard at the age of 5 in the pub (see below – probably the Craven Arms in Brockhampton) and the chorus of Jim the Carter’s Lad to Peter Kennedy in 1957.

A surname long associated with Gloucestershire is that of  Denley. The Denley family were stonemasons in the Brockhampton area, near Sevenhampton, for many years. Throughout the 19th and 20th Centuries, the Denley family provided music for Morris and country dancing in the county. The earliest member of the family that we know was James Denley of Kempsford who was born in 1654 whose wife’s name was Elizabeth. His son, James Denley, who lived from 1681 to 1742, married Rhoda Belcher and died in Shipton in 1742. Many musicians were descended from James Denley including Thomas Denley, Charles Denley and Tom Denley. Each of these has a profile on the website. The Denley family moved to the Shipton area in the middle of the 18th century.

For other musicians in this family see ‘Denley,Charles’ and ‘Denley, Thomas’

The earliest member of Tom’s family that we know was James Denley who was born in 1654 and married Elizabeth. His son, James Denley, who lived from 1681 to 1742, married Rhoda Belcher and died in Shipton in 1742. Many musicians were descended from James Denley including Thomas, Charles and Tom – see below. One of their sons was John Denley  who was baptised in Shipton on 3 April 1727.  Rhoda died in 1733 and in the same year James married Mary Dobbins. They had 10 sons and 2 daughters.

John Denley married Anne Hill in Charlton Abbots on 5 May 1775.They had 3 daughters and 5 sons and appear to have moved to the Brockhampton/Sevenhampton area at this time as one of their sons, David Denley, was baptised on 30 September 1789 in Sevenhampton. David Denley was Tom’s great great grandfather. John died in Brockhampton in March 1800.

David Denley married Hannah Smith of Sherborne on 13 October 1811. At the time of their son James’ baptism on 7 April 1822 they were living at Brockhampton Quar (Quarry). By 1841 David was a mason living at Brockhampton Quarry and they had four sons and five daughters. David Denley died on 9 February 1843 in Warwick, where his brother, George, lived and was buried in Sevenhampton.

David and Hannah’s son James, Tom’s great grandfather, continued in the family tradition and by the time of his marriage in Withington at a young age to Mary Jones, a widow and shopkeeper from Withington, on 9 Feb 1843 he was also stated to be a mason. Their son, also named David, was baptised at Withington on 19 April 1846 when James was stated to be a stonemason living at Withington.

This David, who was Tom’s grandfather, then living in Brockhampton, married Elizabeth Fardon on 20 April 1869 at Severnhampton.  He and his father, James, were both stated to be stonemasons. Elizabeth was a widow, also from Brockhampton, the daughter of William Joynes, a carpenter. By 1871 David Denley had moved back to Sevenhampton and was living there at house no 55 with 3 sons, James S., John W. and Oliver. He was stated to be a ’Beerhouse Keeper’ presumably at the 16th century inn, the Craven Arms, and a stonemason. The family then moved to Cotehay Farm, Charlton Abbots, a farm of 200 acres and he died on 25 May 1880 at the age of 34. His widow, Elizabeth was left with 7 sons, now including David aged 9, George, Charles and Daniel and a daughter, Mary Jane, at home and she continued to live at the farm. David was Tom’s father.

This David Denley married Esther Sophia Denley from Dowdeswell (from another branch of the family)  in the second quarter of 1900 in the Northleach Registration District. Esther Sophia was the daughter of musician Thomas Denley  – see article on Thomas Denley. By 1901 they were living at Brockhampton Quarry where David was working as a stonemason. The same year Tom was born and baptised Thomas David Denley at Severnhampton. In 1900 he was living with his parents at Severnhampton where his father, David, was working as an innkeeper (presumably again at the Craven Arms), and his mother was working as a general dealer. He had a brother, Albert Cecil, aged 8 and a sister, Lilian Alice, aged 7, both born in Severnhampton. Also living with them was his father’s brother George Denley, a single labourer working on a farm. This may well have been the Uncle which Tom mentioned to Peter Kennedy as singing in a local Minstrel troupe.

Tom’s mother,  Esther Sophia, died in 1937 and his father, David Denley died on 2 March 1946 and they were both buried in St Andrew’s Churchyard, Sevenhampton.

Tom and Violet had a daughter, Kathleen Sophia Denley, on 21 February 1932. In 1953 she married John Stagg in Cirencester. She had a son, Christopher John Stagg, in Cheltenham in 1954 and a daughter in 1967 also in Cheltenham. In 1960, 1963 and 1965 Kathleen and John were living at Whitehall Cottages, Andoversford with a possible other son.

Thomas David Denley’s death was registered in the third quarter of 1978 in the Cheltenham Registration District and his wife died on 7 May 1990 in Tredington .

His daughter, Kathleen Sophia Denley died on 29 June 2019 at Knightsbridge Lodge Care Home, Knightsbridge, near Cheltenham, her husband, John Stagg, having predeceased her in 2001. Her son, Christopher John Stagg died in 2018 in Tredington. 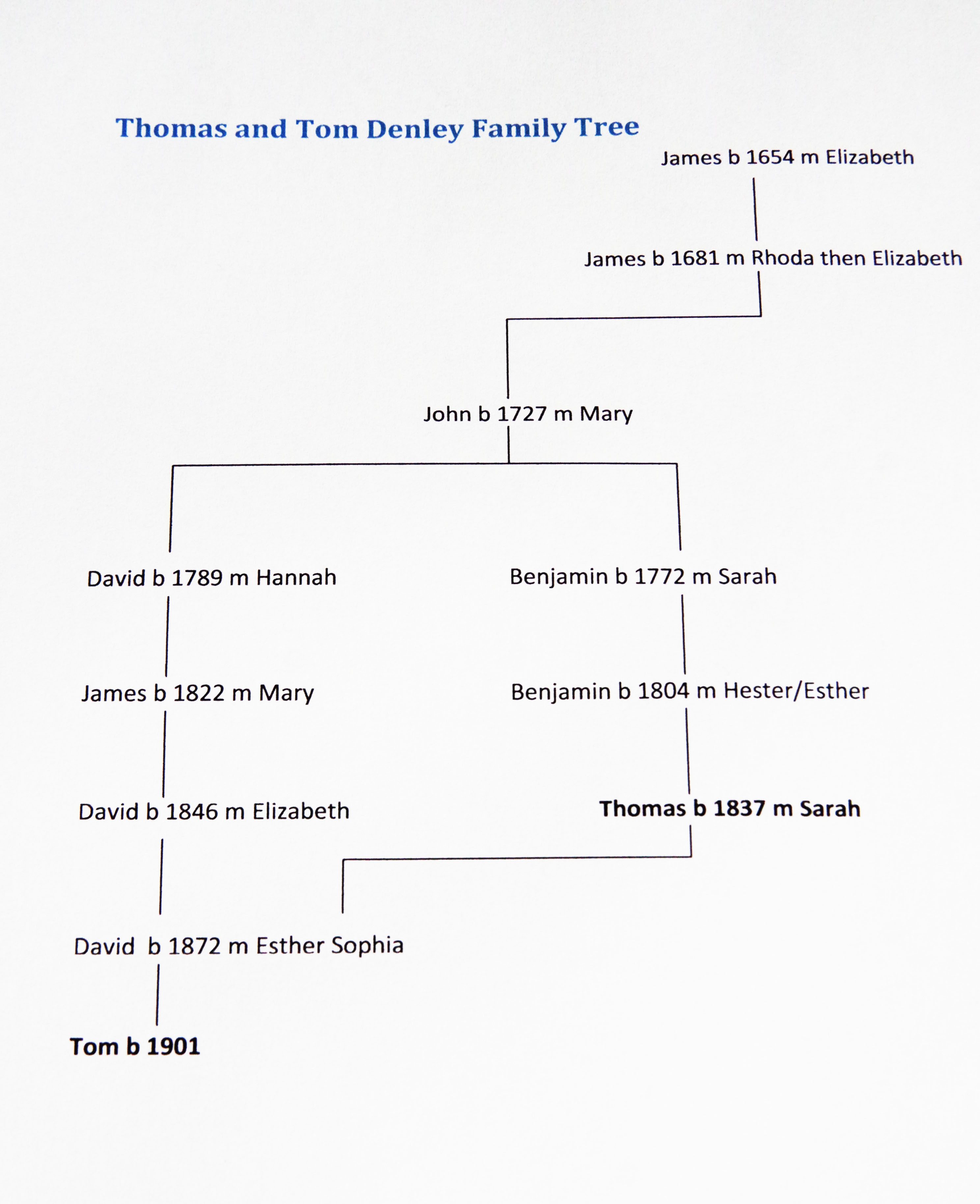