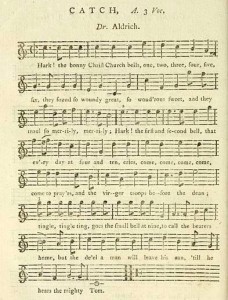 This is a song which we can certainly trace to a known author, as it was written by Henry Aldrich (1647 – 1710) as a ‘catch’, an amusing little ditty to be sung by 3 voices.  The song collecter John Baldwin found versions of it in Oxfordshire in the 1960s.  The author Thomas Hardy and the poet John Clare both knew of the song, so it was presumably well-known ditty, but not often noted by song collectors in general.