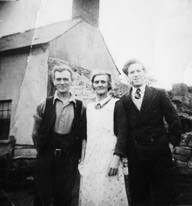 William Edmund Hunt was another of the Brockweir Wassaillers. In 1963 Russell Wortley recorded the Brockweir Wassail song from Charley Williams who had learnt the song from his father, and in 1977 the collectors Andrew Taylor and Bob Patten subsequently recorded the wassail song and a number of other local carols, including Our Saviour’s Love, from Charley.  To hear the Brockweir Wassail see the entry on Charley Williams. Charley said that about 60 years previously, i.e. about the time of WWI, about ten to twenty wassailers would go out on 5 and 6 January.  They took no instruments, but when he went out singing the local carols with brothers Gilbert and Claude Williams they would take an accordion. According to Charley other wassailers were his father, his brother-in-law Bill Bailey and Albert Dibden.

William Edmund Hunt would go wassailling on the horse and cart that he used to deliver milk. 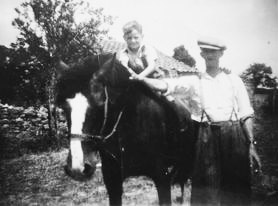 William Edmund Hunt’s family had lived in the area of St Briavels in the Forest of Dean for many years. His great grandfather, William Hunt, was from St Briavels and married Winifred Harris of Newland in Newland on 1 August 1796. His grandfather, Edmund Hunt, was baptised there on 29 July 1810 while William and Winifred were living at Hudnalls near St Briavels. Edmund Hunt married Sarah Nicolas there on 29 January 1837 and in 1841 they were living on St Briavels Common with their son, William, aged 4 and Winifred who was then a widow. Edmund was working as a carpenter. His brother, Timothy, was also a farmer on St Briavels Common where he was living with his wife, two sons and two daughters. By 1851 Edmund was still living at St Briavels then a farmer of 17 acres with his wife, mother, who was receiving an annuity, and son, William. By 1861 Edmund’s mother, Winifred, had died and the family continued to live in St Briavels. In 1861 the farm was stated to be of 10 acres and in 1871 24 acres,

On 13 July 1873 Edmund’s son, William, married Mary Tyler who had been born at Hewelsfield and was the daughter of Charles Tyler, a farmer at Woolaston. At the time William was stated to be living there. Edmund Hunt then died and was buried in St Briavels on 15 February 1877 when his son, William, took over the farm of 25 acres on St Briavels Common where he and his wife were living in1881and he was employing a 14 year old boy. His mother, Sarah, was receiving an annuity. They continued to live at St Briavels and in 1891 they were living there with William’s mother, Sarah and a 15 year old farm servant. William and Mary do not appear to have had any children and in 1895 Mary died and was buried in St Briavels on 24 Mar 1895 when her address was given as Hudnalls.

William then remarried and took a young wife, Margaret, and by 1901 when he was 63 and she was 23 they had three children, Maud, aged 5, Catherine aged 3 and William(Edmund) aged 4 months who had been born in late 1900. They were living on St Briavels Common and William continued to work as a farmer with his own means and he and Margaret had 5 children, including another son, George, who was born in 1903/4 but one of whom died. William Hunt died on 15 September 1903 when his address was given as Pleasant Cottage, St Briavels and he was buried at St Briavels on 20 September 1903. Margaret Hunt continued to live in St Briavels and her children Catherine, William (Edmund) and George were living at home in 1911.

William Edmund Hunt married Myrtle Lewis, the daughter of a coal miner from Gelligaer, Glamorganshire, in Bridgend in 1924. They had a daughter. in 1932 whilst living in the Chepstow registration district and in 1939, according to the electoral register, William Edmund and Myrtle were living at Spring Farm, Brockweir district with a son born in 1935 and a pensioner named Elizabeth Richards. William Edmund was working as a sewerage pipe layer. Williamand Myrtle had seven children. 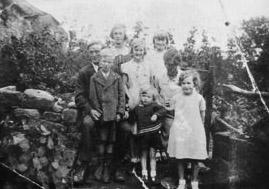 William and Myrtle Hunt with six of their seven children

William Edmund Hunt of Spring Farm, Woodspring, St Briavels died and was buried in St Briavels on 4 September 1975. His daughter married a relation of another Brockweir wassailler, Charlie Williams.