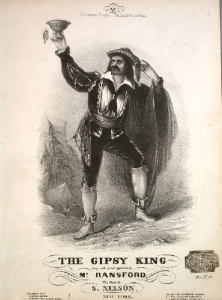 This song, although collected this once in oral tradition, is not really a folk song, more of a parlour piece.  Malcolm Douglas, posting in the online forum ‘Mudcat’ wrote “the song was performed by Mr Ransford, to music by S Nelson (likely Sidney Nelson, the prolific composer of popular songs who also provided the music for The Rose of Allandale, Mary of Argyle and many others).   A look at the British Library catalogue shows an example of 1861 naming Edwin Ransford as lyricist, “The words translated from the German of Goethe.” Rough dates given for the broadside copies might suggest that it originally came out in the 1830s. Ransford (1805 – 1876) evidently also wrote the lyric for “In the Days when we went gipsying”, another favourite which has turned up a lot in oral currency. “

The tune for the song can be found here http://levysheetmusic.mse.jhu.edu/catalog/levy:118.096.

The song represents a romanticised view of gypsy life which few these days would recognise.