Charles Baldwin’s youngest son, Stephen James Baldwin (1873-1955) played for a number of morris sides, as well as in pubs, at country dances and a gypsy wedding. He can be heard on two sets of recordings. One was made by Peter Kennedy in 1952, and issued on Folktracks 45-115 “A Nutting we will Go”, reissued on CD as FTX-115, with 10 additional tracks, 31 to 40, which appear to have come from Russell Wortley. Russell Wortley’s recording (1954) was issued, very slightly shortened, by Leader Records, LED 2068, Stephen Baldwin, English Village Fiddler (nla). The original recording is held in the British Library. Musical Traditions have recently re-issued both sets of recordings on MT CD 334 “Here’s one you’ll like, I think ”, with extensive information on Stephen Baldwin. See their website at www.mustrad.org.uk. In some cases the same tunes occur on both recordings. Where Mr Baldwin sounds in D or G for Peter Kennedy, the same tunes appear on Russell Wortley’s recording in C or F. His fiddle was tuned a tone flat, as reported by Rollo Woods. It appears likely that Peter Kennedy’s recordings were speeded up to bring them up to the usual pitch. Our mp3’s have been slowed down to compensate. Unless noted otherwise, we have transcribed all the tunes on Russell Wortley’s recording a whole tone higher than they sound. For Russell Wortley, Mr Baldwin played most tunes through three times with repeats. He often played the tune differently the first time from the subsequent repeats. Our interpretation of this is that, during the first time through, Mr Baldwin was remembering the tune, and that the later versions represent his considered intention. We have therefore generally ignored the first playing, concentrating on the later versions. The names which Mr. Baldwin used for the tunes are often different each time. As he said to Russell Wortley, “It’s a bit of a job to know all them names.” It seems as though naming the tunes was not as significant to him as it is to contemporary musicians.

Stephen Baldwin inherited his father’s fiddle, which Charles Baldwin had bought at a music shop in Hereford, and he in turn passed it on to his own son Charles, who played it until he was forced to give up when rheumatism stiffened the first finger of his left hand.

Stephen’s son Charlie would also accompany his father in pubs vamping on the piano, and his second wife Grace also played the piano, and would accompany him when he played the fiddle in the evenings – to discourage him from playing in the pub, it is said, though perhaps maliciously – as many a traditional fiddler also enjoyed playing at home if there was a pianist in the family to play along with. As well as playing the fiddle and singing popular songs, he was also involved in a local carol singing party.

Stephen Baldwin became involved with a border morris tradition when, at Christmas one harsh winter in about 1897, Thomas Bishop, the ‘King’ of the morris at Bromsberrow Heath, fetched him over from Newent to stand in for the regular musician, concertina player Bill Rudds, who was ill. Stephen was so taken with the dance that he taught it to a side he himself raised at Mitcheldean, where he was living at the time.

By far the most significant – and sophisticated – element in Stephen Baldwin’s repertoire is undoubtedly his stock of hornpipes. In England, the hornpipe seems to have filled the niche which came to be enjoyed by the reel in Ireland. Its popularity was obviously tied up with its intrinsic association with step dancing, and hornpipes form the liveliest part of the repertoire of many a traditional musician in southern England. It is, therefore, not by chance that Stephen Baldwin’s skill should be most apparent in his playing of hornpipes, which are undoubtedly the most complex and exciting part of his repertoire. The pre-eminence of the hornpipe in Stephen Baldwin’s repertoire, for both the fiddler and his audience, is illustrated by the description which he gave to the local collector and antiquarian H H Albino, of a Gypsy wedding he was invited to provide the music for. Arriving at 3 o’clock in the afternoon, he stayed until 2 o’clock in the morning, perched on a tree stump and playing, in his own words, “nothing but hornpipes”, to which the Gypsies danced “with great vigour”. “The sweat simply rolled off them. They never seemed to get tired”.

Stephen James (‘Stevie’) Baldwin: was born in Hereford in 1873. Before he was born his family had moved between Herefordshire and Gloucestershire, pausing at Ross-on-Wye (Herefordshire) and Dymock (Gloucestershire). But after Stephen’s birth his parents took the family back to Newent in Gloucestershire where his father Charles (‘Charlie’) Baldwin, his mother Eliza (née Bowry or Bowrie), and his eldest brother and sister had been born.

Stephen was the youngest of eight children. His eldest brother, David, was in his early 20s when Stephen was born, and Stephen would have grown up with the youngest of his brothers and sisters. The family lived in Culver Street in Newent – the southward continuation of the High Street – which was home to several other families of Baldwins and Bowrys, as well as the Wesleyan Methodist Chapel where his mother had been christened in 1835.

Stephen Baldwin worked as a plate-layer on the Great Western Railway for all of his working life. During the First World War he served in France with the 13th Battalion of the Gloucestershire Regiment, the ‘Glosters’, and was invalided out after the Battle of the Somme. He was twice married, and had four sons and two daughters.

Stephen Baldwin died at home in Upton Bishop on 24 November 1955, having been afflicted with heart problems for some while.

Part of the booklet notes, written by Philip Heath-Coleman, to the Musical Traditions Records CD of Stephen Baldwin (MTCD334) and further notes written by Charles Menteith and Paul Burgess 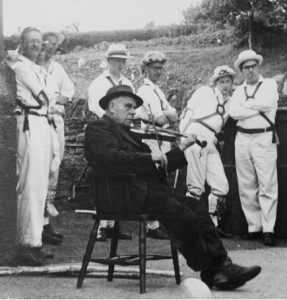 Stephen Baldwin playing in 1954 watched by the Travelling Morrice. 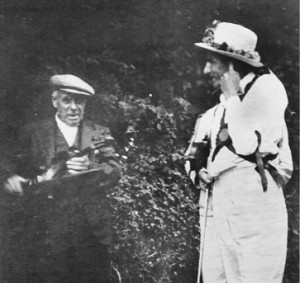 For a comprehensive article on Charles and Stephen Baldwin see the Musical Traditions website here. 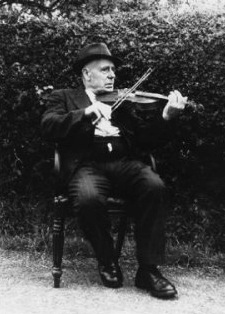