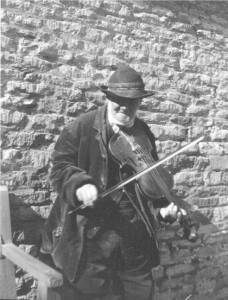 Cecil J Sharp met 72-year old John Mason in Stow-on-the-Wold Workhouse and visited him on a number of occasions: 27-28 March and 2-3 August 1907, 29 July, 2 August and 18 August 1909 and 21-22 June 1912. Mason had played fiddle for the Sherborne Morris set (and possibly others) and, as well as providing Sharp with a number of tunes, he volunteered the address of William Hathaway in Cheltenham, the location of Sherborne Morris’s George Simpson near Didcot and gave other leads towards participants in the Longborough, Bledington and Oddington morris sets. Many of the tunes which Mason described as “Morris Dance” are not generally known as such. He also sang the songs Greensleeves and The Shepherdess to Cecil Sharp on his visit on 28 March 1907 and gave Cecil Sharp the text of a Mummer’s Play including the words for the song The Golden Glove which was used at the end of the Mummers’ Play.

Mason came from Icomb and as well as fiddle played clarinet, flute and concertina. He was also visited by Mary Neal and Clive Carey shortly before he died and they noted several of the tunes he had previously played for Sharp. We have included 22 of John Mason’s tunes on the website.

Most of John Mason’s children left to work in London.

John Mason’s son, Frederick William Mason in 1901 was living at Foxholm Stables, Hammersmith working as a coachman and groom, with his wife, Mercy E. Mason, born in Sussex, and two children, Basil F. Mason born about 1899 and John H. Mason born about 1900, both born in Hammersmith. In 1911 Basil and John were staying with their aunt and uncle Edwin and (John’s daughter) Ada Hathaway at 70 Fairbridge Road, Islington. Basil died in 1972 in Sutton, Greater London.

John Mason’s daughter, Ada Mason married Edwin Hathaway a sorter tracer at the GPO who was born in Marylebone and in 1901 was living at 70 Fairbridge Road, Islington with two children, Ethel May born about 1898 and John Patrick born about 1907, both born in Islington. The family were still living at the same address in 1911 but staying with them were Ada’s sister, Louisa, who was single and working as a domestic parlour maid and Ada’s brother, Frederick William Mason’s children, Basil and John Mason. Ada Mason died in 1936.
John Mason’s daughter, Emma Mason married John Henry West in Aston, Warwickshire in 1916.

John Mason’s daughter, Eva Mason in 1911 was living at The Lodge, Cemetery, Fulham Palace Road, London as a friend and domestic servant of Jane Furner, a widow.

(John Mason stated that certain tunes were morris dances, for example Market Chorus and Bourton Six, but there is at present no evidence that these were used for morris dancing.)

Haste To The Wedding (Country Dance)

Old Heddon Of Forlay (near Barford?)( ?near Burford)
Oyster Girl

Twas of a pretty young shepherdess was keeping of her sheep