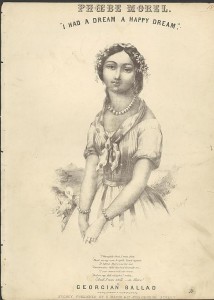 The book Five Hundred Thousand Strokes for Freedom: a series of anti-slavery tracts, of which half a million are now first issued by the friends of the Negro, published in about 1853, has this say:

“Phoebe was the daughter of a wealthy planter in Georgia, who had imprudently contracted marriage with a beautiful Creole ” a slave on his father’s estate. The mother of Phoebe died during the infancy of the child, whose father had her educated and attended with the most affectionate solicitude. He had, however, omitted to execute the necessary forms for her manumission, and the sad consequence of his neglect was that, immediately after his death, his legal representatives claimed the unfortunate Phoebe as a portion of their property. She did not long survive the indignity; for within a few months of her father’s decease, her lifeless body was discovered floating down the dark waters of the Savannah.”

In tradition, it was collected once in Hampshire and this once in Gloucestershire.