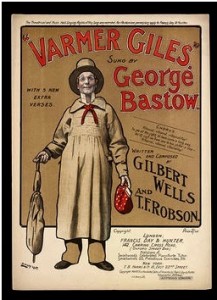 This song, so beloved of country folk, was written as “Varmer Giles” by Gilbert Wells and T F Robson and published in 1902. It is curious that country folk are happy to sing what is a self-parody of the bumbling ignorant farmer, and yet it has proved popular, along with other songs of this genre. Although it is widely sung, collected versions only date from the second half of the 20th century: possibly earlier collectors did not count it as a ‘proper’ folk song. Mr Gardner’s version is splendidly dialectal. The tune is, of course, the ubiquitous “Villikins and his Dinah”.