Harry Illes was born on 27 July 1888 in Lower Swell, the son of Albert and Elizabeth Illes. 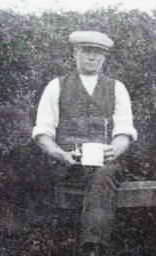 His father was born in Lower Swell, as was his grandfather, Joseph. Joseph was an agricultural labourer as were all his sons. In 1891 Harry’s father, Joseph was an engine driver for a thrashing machine and his mother, Elizabeth, was a dressmaker. Harry had two brothers and six sisters and by 1901 he was working as a farm boy and the family were living at Spa Cottages in Lower Swell where Albert was working as a farm labourer. In 1911 the family were still living in Spa Cottages, Lower Swell and both Harry and his father were working as farm labourers. Harry’s brother, Fred, was a cowman on a farm and his other brother, Joe, was working as a carter on a farm. Living next door to Harry in Spa Cottages was William Leonard Hathaway, aged 33, who was a first cousin to William Hathaway, the fiddler.

During World War I Harry Illes served in France with Princess Victoria’s (Royal Irish Fusiliers) and on his return at the end of 1918 he married Beatrice Harris in the Stow on the Wold registration district.

Albert Teal was born in 1852 in Stow on the Wold, the son of Jesse and Mary Ann (formerly Cox) Teal. His father, Jesse Teal, was a nailmaker and later a whitesmith or tinware worker and blacksmith but by 1861 when Albert was aged 8 his mother was described as a widow and she was working as an agricultural labourer as was his elder brother, William. In 1880 Albert Teal married Anne Thornton of Lower Swell, the daughter of William Thornton, a carter and by 1891 they were living in Lower Swell, 2 houses away from the ‘Ball Inn’ (now the Golden Ball) with two daughters, Mary A. Teal born about 1881 and Emma Teal born about1885 and a son, George born about 1887, all born in Lower Swell. By 1901 Albert Teal was working as a gardener, his son, George, was working as an errand boy and his two daughters had left home. By 1911 they were still living in Lower Swell but their three children had all left home.