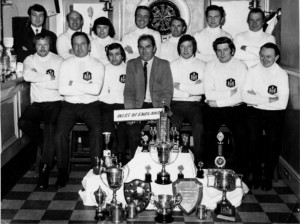 Dave Russell sang The Flies Be On The Turmots And The Jumpers On The Hops and When I Took My Nance To Church to Gwilym Davies in Stonehouse in 1979 when he was about 60 years old. He was from a Gloucestershire family. He was a bachelor, teetotal and a champion darts player. He possibly died in 1997 in the Stroud registration district which includes Stonehouse. It is believed that he is in this image of the first ever darts team of the West of England Darts Association dated about 1973 when he is in the front row on the right.