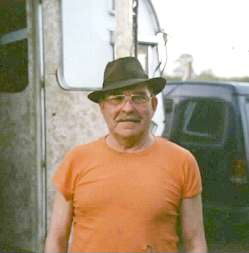 Wiggy Smith was one of the last of the English traveller singers to sing old songs in the old style. Wiggy was born on 3rd July 1926 in a covered wagon parked on the fields of Filton Common near Bristol – the area now covered by Filton aerodrome.  As the first boy to be born in his family, he was named after his father, Wisdom, also a singer,  (the eldest of a family of ten children), but was nicknamed Wiggy to  distinguish him. 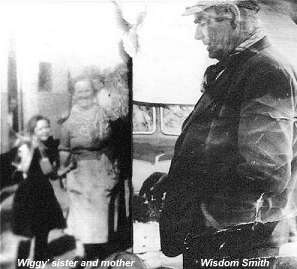 In his early years the whole family travelled, mostly around the Gloucestershire, Oxfordshire and West Midland areas, sometimes living in tents, but mostly in covered wagons – the horse-drawn caravans they call ‘barrel-tops’.  The family had originally come from the New Forest area, which may go towards accounting for the difference in accent between Wiggy and his father and uncles. His father was the eldest of the brothers: Jim, Jabez, Denny, Artie and Bertie.  The girls were Tinia, Moselley, Georgina, Sarah Ann and Lavinia and the family as a whole stuck together, travelling in the same area for much of the time (photo below: 10 November 1950: the family camped at Coomb Hill with the ‘kitchen tent’ behind them – a very short distance from where Wiggy lives today).  Wiggy’s two brothers, Sid and Hiram, live around the Pershore area and is youngest brother, Job, was killed in the war.

Wiggy’s family travelled around the West Midland area in a horse-drawn trailer and knew true poverty of kind which is rare today. He and his family ended up in Gloucestershire where he lived until his death, although he always claimed that his roots were in Hampshire. The many skills he learnt in his lifetime included how to converse in Romany, how to fit a wheel on a wagon, how to go ferreting for rabbits and how to find the best edible mushrooms. At one time he earned a living a prize fighter and remained fit and strong into his seventies. He spent his life living on his wits to provide for his wife Myra and large family. As Wiggy himself said “The money wasn’t about, but it was better times all round.” His descendants amounted to over 100 at his death, including great-grandchildren, all of whom he adored with fierce pride. He served in several capacities during the Second World War and was injured by shrapnel, having to spend some time in hospital with his eyes bandaged.  Whilst in the forces, he’d cycle from Oxford up to Leamington or Warwick to see the girl he was to marry, Myra, from another Midlands travelling family. 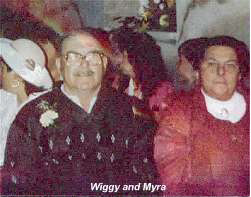 Like her brothers, she was also a fine singer – “You should have heard Myra sing, she knew some wonderful old songs, the poaching songs and everything”. Wiggy’s fine singing meant that, with his brothers-in-law, they would visit different pubs each weekend, and Wiggy would sing with the hat being put round at the end.  “They could drink all night – I couldn’t drink.  I used to do all the singing and they used to get all the drink.  They used to go round with the hat – 7 or 8 bob say.  That was enough to last me and my wife a couple of days for food.” Wiggy performed in many of the pubs around Gloucestershire with his two brothers as The Travellers and fondly remembers the enthusiastic reception they used to receive.

His songs were mainly learnt in the traditional way, from friends and family around the camp fire, or in the many pub sessions that accompanied fruit and vegetable picking in the area. However, he did learn a number of songs from a set of Jimmy Rodgers recordings which he prized. Entertainment on the campsite was often just “… a stick fire!  You’d have a big stick fire, and sit in a circle round it.  Someone would sing a song, and then you’d go right round the circle, everybody did something.”  A lot of his songs were learned like this, and mostly came from his father.  “And we used to have a piece of board, about as big as that [a couple of feet square] and we used to have a mouth organ and play it, and we used to get on the piece of board and tap dance.  The money wasn’t about, but it was better times all round.”

Other songs came from his uncle Artie – the non-swearing boxer.  “He never drank – he’d have maybe a half of shandy or a glass of lemonade.  And he sang all the old songs – in the world I should think!  Now I lived with my uncle for 12 months, him and his wife; that was Artie and Liza -.  that was when I came out of the Army that was.  And in them days there used to be nine of us as lived in a caravan – horse-drawn caravan.  And when we got to bed at night, they used to sleep on the bed up at the top – the girls underneath ’em a bit and we boys on the floor.  And he used to lay there and sing all the old songs and he used to say to his wife “Now I’ve had my song – now it’s your turn Liza, you sing.” And she used to lay there and sing all the old songs.  I got a few that way.”   One of Wiggy’s uncles, Luke Smith, lived further south in Gloucestershire and used to go and sing regularly in the Nag’s Head at Avening.  He was a great singer.  “He used to sing lots of the old songs.  Beautiful they were …” and he was instantly recognisable with his “long, milk-white beard right down his chest.  Everyone round there knew him.”

Wiggy and his family were “discovered” by the Cheltenham folk club scene in the early 1970s, by clubs singers including Ken Langsbury and Bernie Cherry, and before long his songs were being heard in the local folk clubs. This led to an invitation to Mike Yates to come and record the family in 1974 and to the release of a number of songs on Topic Records, namely “I took my dog”, “The Oakham Poachers” and “The Deserter” sung by Wiggy and “The Gallaway Man” and “Go from my window” sung by Wiggy’s father, also called Wisdom. Wiggy lived on the same site, between Cheltenham and Tewkesbury in Gloucestershire for 31 years and worked for 20 years for Mr Berry at Elm Farm, Northwick, picking, driving and marketing as well as doing his fair share of hop picking.

Despite these recordings, Wiggy disappeared from view so far as the folk scene was concerned for about 20 years until a chance discussion between the seasoned song collector Peter Shepheard and Gwilym Davies led to a visit to Wiggy in 1994. By this time he was living in a trailer on a modest site near Tewkesbury in Gloucestershire. At that first visit, he was helpful and friendly and sang several snatches from his repertoire.

With the help of musicians from the Cheltenham Folk Song Club, Gwilym Davies set up a lunchtime recording session in The Vic – the Victoria public house, a modest hostelry in the rather deprived St Pauls area of Cheltenham. That lunchtime session proved to be the first of many, and in the ensuing months and years, Gwilym Davies and Paul Burgess made a point of going to the Vic whenever they could, taking melodeon and fiddle with them and providing entertainment for the regulars.  At all these sessions, Wiggy has obliged with a few songs and his singing usually brings a respectful hush to the bar, a tribute to the quality of his voice.  This led in turn to his being invited to a number of English Country Music Weekends at Postlip Hall, near Cheltenham where he was videoed by Gwilym Davies. This was Wiggy’s first encounter with the folk revival and he took to it immediately. The power and timing of his singing was compelling and a lesson to many there. The fact that he brought an unpredictability and spontaneity to the proceedings was brought home when on one occasion, on sitting through a performance of the “Holy Well” by a certain floor singer, he became increasingly restless, until at last he could contain himself no longer and called out in mid-verse “Stop. It doesn’t go like that.” Imagine the singer’s surprise when Wiggy then proceeded to sing his version of the same song, to the delight of the audience.   Only Wiggy could have got away with it and when Gwilym Davies subsequently mentioned the incident to him, he was unrepentant, saying “Well, the silly bugger didn’t know it properly, did he!”

In the late 90s, Paul Burgess and Gwilym Davies spent many hours in Wiggy’s company, playing music, singing songs and chatting. It was more than mere collecting songs. It was sharing his life reminiscences with him.

Wiggy’s repertoire included folk songs, modern sentimental songs, George Formby songs, Irish songs, cowboy songs and snatches of step dance tunes. His favourite song was in fact, ”You’re the only good thing to have happened to me” which he sang in memory of his late wife Myra. His singing is an object lesson to singers in the folk scene. His voice was strong and ringing and he never hurried a song. He had a way of drawing the listener into the song, even when he did not have the complete song, such as “Barbary Allen” of which he only knew 3 verses, but sang them in such a way that you felt you were hearing the complete story. It is probably not exaggerating to say that his hard life was reflected in the tough, no nonsense style of his singing.

His last years were characterised by ill health, but he was nursed tirelessly by his daughter Alice. When he passed away in 2001, 700 people attended the funeral at Cheltenham cemetery, of whom all but 4 were travellers. As the grief subsided in the pub afterwards, the songs started to flow, including his version of “The Deserter”, which could almost be seen as his epitaph:

I was once young and foolish like many who is here

But if I had my own home and my sweet liberty

I would do no more soldiering by land or by sea.