Mrs P. Wiggett was visited by Cecil Sharp at the village of Ford on 9 April and 13 August 1909 (on his August visit Sharp spelled her name as ‘Wickett”). She sang him The Shepherdess, The Broken Token, Riley, Blow The Fire Blacksmith, Young Banker and Jimmy and Nancy.

Mrs Wiggett’s maiden name was Lavinia Wearing and she was from a family of farm labourers, including her father, Richard Wearing, and her grandfather, John Wearing. Her ancestors lived in Bledington at least back to 1760, including her great-great grandparents, John and Martha Wearing, her great-grandparents, Thomas and Elizabeth Wearing, her grandparents, John and Elizabeth Wearing and her parents Richard and Ann Wearing. Her grandfather was still living in Bledington in 1841. Her mother was from Upper Swell. Lavinia Wearing came from a large family and had at least three brothers and five sisters. Lavinia lived at home in Lower Swell with her parents until at least 1851.

In 1861 she married Percy Wiggett, an agricultural labourer born in 1840, but before this in about 1857 she had a son, William George, who in later life used the surname Warren. In the 1901 and 1911 Censuses it was stated that a Jabez Warren, a widower living with her, was her brother and William’s uncle, so it would appear that William’s father had the surname Warren. In 1861 Lavinia and Percy were living in Ford, next door to Percy’s parents, with Lavinia’s son, William George, who was using the surname Wiggett. By 1871 they had three daughters: Ann Margret born 1862 in Harford Hill, Gloucestershire, Elizabeth born about 1859 in Cutsdean, Mirieam (sic) born about 1856 also in Cutsdean and Lucy born about 1854 in Ford. A son, Percy, was born in 1881 but died at the age of 5. In 1891 the family were still living in the village of Ford where Percy had been working as a road contractor and labourer, and had two further daughters, Virginia born about 1882, and Florence, baptised in Temple Guiting 1 April 1887, and a son, Albert Allan, baptised in Temple Guiting on 6 July 1879, all born in Ford.

Lavinia’s husband, Percy, died in 1897 and by 1901 Lavinia was still living in Ford, described as a retired famer. A widow, she was living with her son, William George, who was then using the surname Warren and was a farmer employer. Also living in the same house were Jabez Warren, then described as her brother, a widower and carter on a farm, a nephew, Tom Kench aged 24, a gardener (not domestic) who was single and born in Cutsdean, and a servant, Ethel Townsend. Lavinia was living in a house next door to the Plough Inn which was then being kept possibly by Percy’s brother Jesse. By 1911 William George Warren was head of the household and a farmer in Ford, still single. Living with him were Lavinia, aged 70, Jabez Warren, now described as his uncle, a widower and farm labourer, and a servant, Isaac Miles, a waggoner on farm. Jabez died in 1911 and Lavinia in 1916 aged 76.

As well as William George Warren (see above) Lavinia Wiggett had six daughters and two sons.

Lavinia’s daughter, Elizabeth Wiggett was born about 1864 in Cutsdean. She lived at home until at least 1871 but by 1881 she had left home and was working as a domestic servant in the house of the High Street grocer, draper and postmaster in Bourton on the Water. She married Raymond Fry from Greet towards the end of 1887 in Winchcombe registration district. In 1901 Raymond and Elizabeth were living in Greet with their daughter Bessie, born in 1893 in Greet, and Raymond’s elder brother, Rueben. Raymond was working in a jam and sweet factory. He was probably employed at the Messrs T.W. Beach and Sons Ltd factory which had moved from Toddington to Evesham around 1907. Elizabeth died at the end of 1902. In 1911 Elizabeth’s daughter, Bessie, was working as a domestic maid in the house of the Vicar of Stanway at Wood Stanway vicarage. Bessie Fry married Walter G. James in the Winchcombe Registration District in 1922. Bessie Florence James of 4 Fairfield Road, Cheltenham died in Cheltenham on 29 August 1946 when probate was granted to her husband, Walter George James, a gardener.

Lavinia’s daughter, Miriam Wiggett was born in Ford in 1867 and was baptised in Temple Guiting Church on 21 April 1867. She lived at home until at least 1881 and married Charles Humphries, a general labourer born in Hinton Charterhouse, Somerset, on 4 September 1889 in Temple Guiting. They moved to Somerset and in 1891 were living in Hinton Green where Charles was working as a railway labourer and they had a six-month old daughter, Miriam S. Humphries. In 1901 their situation was the same but they had four further sons, Percy Samuel born 1892, Frederick born 1895, Arthur Victor born 1898 and a three-day old baby, later named Nelson George and another daughter, Edith, born 1896, all born locally. Between 1903 and 1906 the family moved to Tellisford Lane, Norton St Philip in Somerset and in 1911 Charles was working there as a timber feller and labourer. They had three further children, Frank, born 1903 in Charterhouse Hinton, Margrett Olive, born about 1906 in Norton St Philip and Albert Edward born 1910 in Norton St Philip. Percy Samuel was still single and working as a cowman on a farm and the children from Arthur down were at school but each was also described as ‘farm boy’. Miriam died in Frome, Somerset in 1938, the same year as her husband, Charles.

Miriam’s son, Percy Samuel was a driver with the Royal Engineers during World War I and later in World War II joined the Home Guard. He died 27 August 2006. 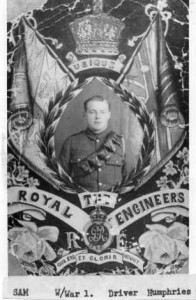 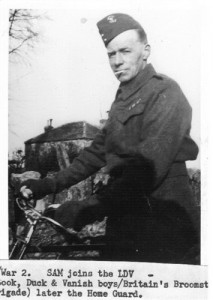 He married Isobella Bishop in June 1914 in Bridgwater, Somerset and they probably had five daughters, Christine, born 25 December 1920 in Devises, who died 3 December 2009 also in Devises, Mabel Olive born 30 December 1932, Joan Doreen born 1927 in Westbury, Wiltshire, who died aged 11, Caroline Winifred Mary born 8 February 1936 in Rhode, Somerset and another daughter and a son Percival A. born in August 1915 in Frome. Percy died in Somerset in 1954. His son Percival died on 20 July 1982 in Trowbridge. 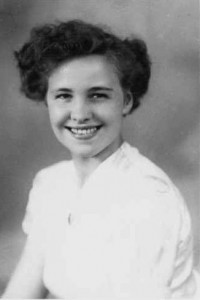 Percy’s daughter, Mabel Olive Humphries, married twice. She had two sons and a daughter from her first marriage and two sons from her second marriage. She died in 1998 in Westbury, Wiltshire.

She firstly married John Ratcliffe Holland in Alton, Hampshire on 14 July 1951. He was born in Philadelphia on 12 November 1923 and had been previously married. He had his own firm in Shepton Mallet – J.R.Holland &Sons . He died in Shepton Mallet on 8 October 1998. 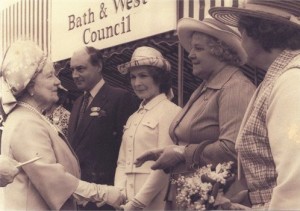 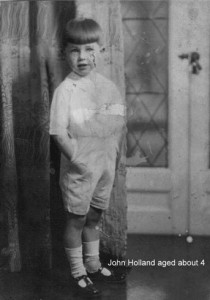 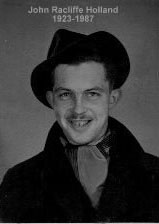 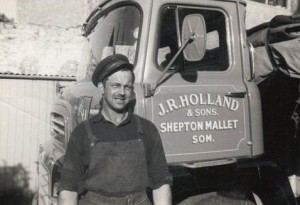 They had four children.

One was Gordon Samuel Holland, born in Hildenborough, Kent in July 1949. He was married to Jean C. Kennedy on 24 August 1969 in Wells, Somerset. Gordon Samuel had a daughter, Roseanna Marie Holland, who was born and died in 1981.

Another child of Mabel Olive was Julie Marianne Holland who was born on 10 May 1951 at Alton. 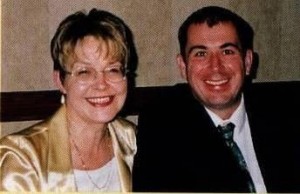 She married twice, firstly to Peter John Tuck on 18 April 1970 at Wells and later to Clive Boness. They lived in Canada where Julie died on 9 December 2006 at Vancouver.

Percy’s daughter, Caroline Winifred Mary Humphries, married Raymond J. Bishop in 1954 at Pewsey Church. At the time she was a housemaid at Avies Farm, Pewsey, and he was a lorry driver at Anvil Hops in Pewsey. Raymond later became a prison officer at Bristol in where he was working in1969.They had four daughters and two sons. Raymond in died in 1994 and Caroline died on 27 June 2007 in Bristol.

Lavinia’s daughter, Lucy Wiggett was born about 1869 in Ford and christened in Temple Guiting on 2 May 1869. No more is known about her.

Lavinia’s daughter, Virginia Wiggett was born in Ford in 1872. She married George Troughton in 1890 in the Winchcombe registration district. In 1901 they were living in Greet where George was working as a general labourer and they had three sons, Percy George born 1892, Ernest Leonard born 1897 and Reginald D. aged 1 and one daughter, Frances E. aged 6, all born in the Winchcombe area. By 1911 the family had moved to 13, School Road, Bengeworth, Evesham where George and his eldest son, Percy were both labourers at the jam works. They were probably employed at Messrs T.W. Beach and Sons Ltd factory as was Raymond Fry above. Frances was living at home and single and Reginald was an errand boy. They had a further son, William R. aged 10, and daughter Florence E. aged 8. They also had a boarder, Harry Dolphin aged 3, born at Bengeworth. All the children had been born at Greet. Virginia died in the Evesham registration district in 1941 and George Troughton died there in 1955. On George’s death probate was given to Olive Margaret Troughton, another daughter who was born on 19 September 1911 in Evesham. She never married and died in Evesham where her death was registered in January 1997.

Frances Eleanor Troughton was born in 1895 at Ford village. She married John B. Gisbourne in early 1914 in the Evesham registration district.

Lavinia’s son, Albert Allen Wiggett was baptised in Temple Guiting on 6 Jul 1879. He married Kate Caroline Bedford, who was born in Berkhamstead, Hertfordshire, in Brentford, Middlesex in 1899 and by 1901 they were boarding with a blacksmith from Suffolk, Benjamin Hayward, and his family at 78 Antrobus Road, Acton, Middlesex where Albert was working as a gardener. By then they had a son, Albert Percy Thomas Wiggett, who had been born in Acton the previous year. By 1911 they had moved to their own home at 22 Kent Road, Acton where their son was at school and Albert was working as a jobbing gardener. They also had two further children, a son, Leslie Allen born in 1908 in Acton and a daughter, Dorothy Alice born in 1911 also in Acton. Two further children had died by then. In 1939 Albert Allen Wiggett and Kate Caroline Wiggett were living at 2 ,Westlea Road Ealing according to the London Polling Book.

Their son, Leslie Allen Wiggett had married Winifred E. Gilling in Hammersmith in 1932 and between 1936 and 1964 they lived at 23 Shelley avenue, Ealing. They had a son, Alan C. Wiggett, who was living with them at this address from 1959 to 1965. Leslie Allen Wiggett died on 9 February 1965 and was cremated in Breakspear Crematorium, Ruislip. His son, Alan C.Wiggett, married Helen J. Corrigham in Ealing in 1969.

Lavinia’s daughter, Florence Wiggett was born in Ford in 1887 and baptised in Temple Guiting Church on 1 April 1887. She married Robert Flower, who was born in Poppleton, Yorkshire and currently living in Roel, on 6 August 1898 in Temple Guiting Church. By 1911 they were living at Brockeridge, Twyning, where Robert was a smallholder. They had been married for 11 years and had one daughter, Annie Lavinia Flower, born about 1908 in Twyning. Robert Flower died in Cheltenham at the end of 1937. Annie Lavinia Flower married Vincent Cherter/Chester Dale, a carpenter born in Tewkesbury, in Cheltenham at the end of 1938. According to the Sheppard/Workman family tree on Ancestry.com, Annie Lavinia Dale died in Malvern in 1996 and Vincent Chester Dale died in Malvern in 1997