Danny Brazil was born in 1913 in Ireland and was the last surviving member of a family of 15 siblings with a huge repertoire of traditional song and dance. His parents were Londoners, who made a living dealing in horses. After the birth of Danny’s older sister Lementina near Southampton the family moved to Ireland for 27 years, where Danny was born. The family then moved to Gloucester. The family sold up their horses and then dealt in rags and scrap iron. Danny served throughout the Second World War as an ambulance driver, seeing service in Poland, Holland, France “and all over”. 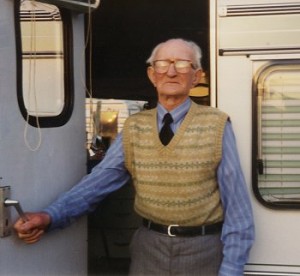 The whole family were musical and all the family sang and several played instruments. Some of the family including Danny were step dancers and one used to sing the ‘tuning’ or mouth music while the other step danced.

Danny was a phenomenon as a singer of folk songs. He had a large repertoire, of which he was immensely proud, and unlike many gypsy singers he usually knew complete versions of songs, with all the verses. He could not read but had a prodigious memory for words. However, a fight he had had many years previously had left him with a damaged voice box. He was still able to sing and convey the words and tune but his voice unfortunately had lost its tone. He also played tunes on the mouth organ.

In Danny’s latter years he suffered bad health and had an operation to amputate a leg but his mind and memory remained sharp to the end.

Danny and some of his siblings were recorded extensively by Peter Shepheard in the 60s and then by Gwilym Davies and Mike Yates in the 70s. Gwilym made further recordings of Danny in the 90s. Danny Brazil died in 2003 in Cheltenham.

(Based on an article by Paul Burgess published on Musical Traditions, with additional information from Gwilym Davies. More information can be found on http://www.mustrad.org.uk/enth14.htm)

The songs in Danny’s repertoire:
• All For A Pretty Ploughboy
• Are we to part like this, Bill
• Ball of Yarn
• Banks of Sweet Dundee, The
• Betsy the Milkmaid (Blackberry Fold)
• Bold Keeper
• Box on her head
• Brandon on the Moor
• Come All You Lucky Gentlemen (Wassail)
• Crabfish, The
• Croppy Boy/Macaffery
• Croppy Tailor, The
• Down by the dark arches (Young Sailor cut down in his prime)
• Down in the Coalmines
• Game of all Fours, The
• Golden Glove, The
• Green Bushes
• Henry Martin
• Her Gown so Green
• I met a maid all in white
• If I were a Blackbird
• Irish Sweep, The
• Jack and the Robber
• Limpy Jack (Thornymore Woods)
• Lord Bateman
• Maria and Caroline (The Folkestone Murder)
• Mossy Green Banks of the Lee, The
• My father is King of the Gypsies
• My Love Willie (A Sailor’s Life)
• Old Bog Road, The
• Old Man came Courting me, An
• Old Riverside, The
• Once a Bold Fisherman courted me
• Out in Australia by the setting sun (Sing me a song of Ireland)
• Poison in a Glass of Wine (Jealousy/Oxford City)
• Poverty Street
• Rambling Irishman (Rambling Journeyman)
• Resting on the Stile, Mary
• Rolling in the Dew
• Romany Rye
• Salisbury Ram (Derby Ram)
• Schoolmaster’s son, The
• Seamen Song, The (Cruel Ship’s Carpenter)
• Shake Hands and be Brothers again
• Shot like a bird on the tree
• Side by Side (parody)
• Son Come Tell It Unto Me (Edward)
• Song of the Thrush, The
• Three Brothers in Fair Warwickshire
• Underneath her Apron
Fragments:
• Brake of Briars
• Cuckoo, The
• Barley Straw, The
• Barbara Allen
• Freddie Archer